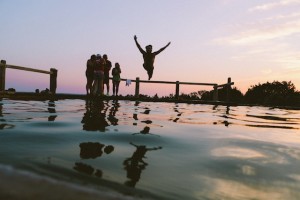 Arguably the best TV drama of the last decade begins each week with a silhouette of a man in a perfect suit falling in slow motion from a skyscraper, through a boundless field of perfect ads for the perfect life. Mad Men centers on a very troubled yet relatable man who hides his real identity from everyone around him, who hides his infidelities from his family, who hides his own vulnerabilities from himself, and who earns his extravagant living convincing America that consumer products can offer satisfaction beyond what they could ever really provide. Through the double lives of Don Draper, the series illustrates and deconstructs many of the commonly held illusions about what creates happiness and success in modern life; authenticity is nowhere to be found. In this era of complex serialized dramas, Mad Men is not the only series centered around a double life. Some of the most popular cable shows of the last decade feature similar themes. On The Sopranos a Mafia boss pretends to be a suburban businessman. Homeland centers on a brilliant CIA agent who hides her bipolar disorder and her relationship with a returned P.O.W. military hero, who in turn is hiding his secret identity as a Jihadi. On Breaking Bad a High School chemistry teacher battling cancer builds an underground crystal meth empire. Dexter is a crime-scene analyst who conceals being a serial killer. The Americans are Soviet double agents masquerading as a suburban American family. Although most of these shows unfortunately center only on straight white male protagonists, people of many gender and cultural identities enter psychotherapy struggling with the experiences, gratifications, difficulties, and consequences of hiding important parts of themselves from those closest to them, or even from their own awareness.

These double lives are not often as extreme as those on TV (my practice, for now at least, is not full of spies and mafia bosses), but much like we see dramatized, the hidden life is often “where the action is,” full of powerful feelings and conflicts, fears and hopes. Precisely what about ourselves we believe we must hide can vary. Don Draper, Tony Soprano, and Carrie Mathison (Homeland) believe they must hide their vulnerabilities to survive; Dexter, Walter White (Breaking Bad), and the Jennings (The Americans) must hide their power and aggression. In psychotherapy, we are afforded an environment and relationship in which we can transform these kinds of secret conflicts in ways that the characters on these shows rarely have. With help and guidance we can open up the powerful energies and fixed beliefs that have become closed, come to terms with the consequences of that opening, and integrate these liberated aspects of ourselves into a more expansive whole.

Over the first season of Mad Men, we come to learn that Don’s real name is Dick Whitman, that he was raised a poor orphan in a Depression-era brothel, and that he slipped into the identity of his army lieutenant after the man was mortally wounded beyond recognition. Lowly Dick Whitman creates his new identity in an attempt to escape everything traumatic and impoverished about his early life. Don discovers he can apply his genius for reinvention to his work as a brilliant advertising “creative.” If he can turn himself from a friendless, anxious orphan into a suave hero of business, desired by every woman, envied by every man, then he certainly can transform a cigarette from a dangerous addiction into a “toasted” delight, an ordinary watch from a time piece into a “conversation piece,” a tacky beachfront hotel into an existential escape from the worries of daily life. The miracles of reinvention are endless, and Don even reinvents advertising itself from it’s earlier method of publicizing a product’s actual qualities, into a magical transformation of consumer products into symbols that satisfy primal human desires, emotional longings for home, family, sexiness, love, strength, and more. Through the layered worlds of advertising and Don’s personal life, Mad Men both exposes the seductiveness of the American passion for endless reinvention, and the emotional and social toll of pretending that something is more than what it really is. Just as Don can never really feel recognized or loved while wearing his false persona, we as a culture have been seduced into believing that the products we buy will grant us the personal qualities and emotional connection for which we hunger.

Though Don always wants to project his image as a perfect man with a perfect life, on the inside he is still living in another Great Depression, finding little satisfaction in his success, the love of his wife and children, his sexual affairs, or the admiration of his colleagues. Over the course of the series, Don’s secrets are gradually revealed, often against his will, and though the consequences of his being “found out” are significant and irrevocable, he also seems to gain a measure of emotional freedom with each discovery. The sixth season ends with a simple but powerful moment that at least briefly seems to culminate Don’s journey. He takes his children to see his real childhood home, telling them simply that “this is where I grew up.” He wants them to know who he is, despite recognizing it will forever change their perception of him.

The process of integrating our double lives involves recognizing and sometimes grieving the consequences that hiding parts of ourselves has had on our lives and on those dear to us. This series subtly illustrates the psychological repercussions of coming to recognize that a cigarette or a car or a fast food burger is what it is regardless of the name we give it and the seductive allure of its packaging. At the same time, the identities we create for ourselves can be very useful, because they reveal essential truths about our desires, our longings, and what we want out of life. Even if one of the rewards of therapy is the peace of mind that comes from learning to accept our own vulnerabilities, this process also enables us to transform and to bring more of what we dream for ourselves into reality in an authentic way. In a world made only of ads, illusions, pretend identities, shiny surfaces, it can feel like we have nothing to stand on. We don’t know if Don will fall forever, but over the years there have been encouraging moments. We as viewers hope that he finds a way to build a different kind of life, one that doesn’t only look good from the outside, but that generates the inner wholeness and fulfillment that Don tries to convince America it will find in a Hershey bar. Mad Men suggests that perfection is a silhouette, a stylish and seductive shadow, beautiful in its own way, but lacking the dimension and color that animate a fully engaged life.

Jonathan David Moss, LMFT is a psychotherapist who sees adults, couples, and adolescents in Noe Valley. He specializes in working with different forms of depression, anxiety, and relationship difficulties, writes about art and culture through the lens of the depth psychologies.

Posted in THE REAL YOU and tagged Authenticity, Falling Apart, Psychotherapy, Relationships, Vulnerability
← 12-step doesn’t work for everyone: why I love harm reductionFog and Mood: everyday invitations to deeper feeling →