Well, here I am.  After a few months off writing for Psyched in San Francisco Magazine, I have been bubbling over with ideas and topics I couldn’t wait to sink my teeth into and share.  First, I wanted to write about animal behavior and what it can teach us about human behavior (a lot).  Second I wanted to write about Kanye West and his relationship to media and its consumers, which I planned to link to how our personal relationships to pop culture can reflect something about us and where we are at any given moment in our lives.  Third, I wanted to write about a favorite topic of mine: anger.  I was trained to think about and view anger as a secondary emotion, a response to feeling threatened or vulnerable.  When this happens our animal brain and its’ fight or flight’ response supersedes our brain’s prefrontal cortex which controls thought and reason.  Typically anger is expressed when we don’t feel safe enough, or know how to connect constructively to its underlying emotions.  Anger gets a bad reputation not just because of how it feels but because it’s expression can often be scary to experience and/or receive.  Sadness, for example, is primarily contained to one’s own experience whereas anger runs the risk of infringing on other people and possibly invading their emotional or physical space so we are erroneously taught that it needs to be contained, controlled, or managed.  When I began editing my salient and fascinating draft on this topic my heart was, at least momentarily, not in it.  I was struck by an overwhelming desire to take a nap.

As a long suffering victim of FOMO (Fear of Missing Out), I have the kindergarten report card to prove my hatred of naps and know this desire isn’t real.  I don’t really want take a nap but my last few weeks have been, suffice it to say, draining and exhausting and this is a cue from my body and my brain that both of them need some attention.  I find this cue pretty annoying.  I don’t have time for it.  I’m busy trying to edit an article so I can get to my long to-do list plus properly attend to people in my life.  I also know from experience that if I ignore this cue, it will only get worse.  Worse can mean a lot of things but, overall, it will mean I’ll spend so much energy shutting out the cue that my energy reserves needed to edit this article, complete my to-do list, and connect meaningfully with loved ones will become depleted and nothing will end up happening the way I had hoped.  Stop, Drop, and Roll. 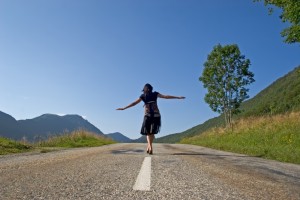 Seven years ago this catchy phrase started popping into my mind from wherever it had been lying dormant since my nap-hating years.  For those who don’t remember, or didn’t grow up in the earthquake capital of the U.S., this is an emergency drill ritual taught annually to school children.  Stop, wherever you are and whatever you are doing.  There is an earthquake.  Drop, under your desk or the closest nearby table.  And Roll, into a crouched ball position with your arms protectively wrapped around your neck.  Perhaps it was my years of acting training, which served as a primer for my study of human behavior, combined with years of psychology training, both of which involved a constant thread of mindfulness training, but somewhere along the way Stop, Drop and Roll became my quick reminder that an emotional earthquake is happening within, or around me.  It means I better Stop, Pause, Breathe, Connect.  And Pause again.

Stop.  Whatever I am doing, wherever I am.  Something seismic is happening.  Pause.  Breathe.  Connect to my quickly rising heart rate and scrambled feelings.  Pause.  This gives me some time, varying lengths depending on the situation, to take stock of where I am and what’s happening around me.  Then I can unscramble my feelings and respond the way I want to the situation at hand.  I suppose it’s a loose metaphor but “Stop, Drop and Roll” reminds me that we encourage, teach, and make space in our brains for rituals to protect ourselves from dangerous physical situations.  And it’s just as important to do the same on an emotional level.

This reminder was helpful yesterday.  It allowed me to gain some space and presence with which to respond to myself and others in a way I could feel good about.  So then why did I wake up feeling so pissed off this morning?  Because, with or without my emotional exercise, I felt like my day had been hijacked.  The day I wanted to have didn’t happen.  The article I wanted to write isn’t the one you’re reading because my desire to publish it was stripped away.  I’m angry about that.  It feels unfair.  Which sounds immature.  Which sounds like I’m judging my experience.  If this hijacking had occurred due to my own personal angst it would have felt, in some way, like my choice.  But this occurred because of external reasons and other people’s problems being taken out on me.

Sometimes the best laid plans get ruined.  It could be preparing for and cooking a nice dinner to surprise your partner who ends up coming home in a bad mood after being yelled at by a supervisor at work.  Your plans for a romantic evening may be hijacked by sullen negativity that, most likely, has nothing to do with you.  Or your boss has an emergency project and you suddenly have to stay at work late and cancel plans with a good friend.  Now you’re stuck at work and your friend is annoyed for ruining her evening.  Or your parent calls with some upsetting news and that family vacation you were looking forward to takes on a different tone.

Sometimes our best-laid plans work out.  Sometimes they get derailed.  Sometimes they get hijacked by life, by bosses, by loved ones and even just passers-by.  We’re thrilled when they unfold the way we had hoped, and we’re disappointed when they don’t.  Depending on your own personal history, disappointment may give way to, or be masked by, anger, frustration, sadness, amongst other emotions.  Some of us, consciously or unconsciously, have developed supportive and constructive paths with which to cope with these feelings.   Other paths, like drinking or binge eating, may feel supportive in the moment but can quickly turn destructive and create more complications.  After years of working with clients, I have discovered what might not be a law of physics but certainly seems to be a law of life: if whatever goes up must come down, then whatever comes down must go up.  Maybe it’s not a must, but it’s a strong probability.

A few fancy therapy quotes or something from Buddha could probably tie all of this up in a neat bow.  But life doesn’t give you neat bows, so the most genuine way I can end this is by sticking with the sage wisdom of a first-generation daughter of Russian immigrants whose parents arrived in the U.S. through Ellis Island, after leaving all they knew behind with the hope for a better life.  Born in 1907, she amassed over a century of life on this earth, was a walking history book, and it’s safe to say, saw a thing or two.  My Grandma Betty.  “Man plans, god laughs,” she used to say with a wry smile.

My day was hijacked yesterday.  Could I have finished my article about anger?  Absolutely.  But life forced its way in, the way that it does, and I decided to listen.  Sometimes that’s just what happens.