The couple on the couch seemed confused and frustrated.

“I think that you are both caught in an exhausting and frustrating pattern,” I said “Carlos, you rely heavily on your intellect and rationality, and Hrishi is very expressive and comfortable in his emotions. I think that his expressiveness is difficult for you to understand, but even more difficult to tolerate. Hrishi, you get frustrated that Carlos will not meet your emotional needs so you wind up feeling like he is cold and uncaring, and you try to provoke an emotional reaction.”

After a pause of several minutes, Carlos said, “I don’t understand why we’re together. It… it just doesn’t make sense.” 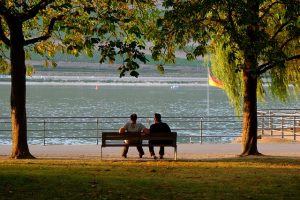 The cliché about relationships, that opposites attract, has a lot of truth to it, but it is more complex than the pithiness of the cliché suggests.

Carlos was a child of immigrants. Born and raised in the U.S., he had little emotional connection to his parents, who worked tirelessly. In ways both small and large, they sent messages to Carlos that hard work was essential, others could not be trusted, and family was a socioeconomic reality, not a sentimental one. Hrishi grew up surrounded by a large extended family that was collectivist. Individuality was eschewed and group achievement was highlighted. This history is important, because it is not simply that Carlos leaned toward cognition and Hrishi leaned toward emotion. What was harder to see was that Carlos was immensely uncomfortable with emotionality and Hrishi was immensely uncomfortable with intellect and reason.

In childhood, we begin building up an unconscious inner world based on observing those around us. Because we are young and limited in our emotional and intellectual capacity as children, our many interpersonal interactions are experienced as extremes – so that good experiences are idealized and bad ones become terrifying. A child like Carlos saw rugged individualism and self-reliance, whereas Hrishi may have observed close bonds built on emotions and felt safe to express his feelings.

We take these patterns into adulthood and our romantic relationships.

The strongest bond between a couple may well be the harmony of their unconscious images and patterns of relationships. This harmony can take on many different looks. If we grow up developing these ideas of which interactions are good and which are bad, we are forced to suppress aspects of ourselves. Our partners may seem to characterize a repressed part of our own personality.

It is not uncommon for very dissimilar partners to find in each other what they have most repressed in themselves. We externalize intolerable parts of our self by eliciting them in the other, and the other fulfills those expectations. (All interactions between two people involve a complex series of subtle and overt cues to lead each individual into particular patterns of interacting – in other words, we are always, mostly in innocuous ways, manipulating others while being manipulated. In psychology, we call this “projection.”).

There are several reasons that we may project these unwanted aspects of ourselves onto a partner, but perhaps the most important is that it allows us to feel more in control over these unwanted bits of self. Imagine a young child, maybe someone like Carlos, who learns that expressions of emotions are bad. But, emotions are a normal part of the human mind, so how then is the child left to manage something that is naturally occurring? We cannot project them onto strangers because we would lose them. The ideal situation is to find another to consistently fulfill my projections, (they’re safer in the other versus me), and to try to work through these experiences.

Think of the relationships you know. You may see this repeatedly. An orderly and efficient person with one who is messy and has a chaotic life. An expressive extrovert with a reticent introvert. A passionate person with an apathetic one. A controlling individual with a passive one.

In finding this type of partner, an opportunity is created to find somebody that creates stability and helps create a whole sense of self. Alternatively, it can cause tension with each other, as the other tries to control or punish that split off part of self. This is the pattern that Carlos and Hrishi found themselves in. When Hrishi felt alone and insecure, he poked and prodded at Carlos, saying the most deeply hurtful things he could, all in an unconscious attempt to get an emotional reaction out of Carlos. Hrishi could not stand Carlos’ stoicism and rationality and needed to attack and silence it. Similarly, Carlos made hurtful comments to Hrishi, calling him emotionally fragile, needy, and messy. When Hrishi became emotional, Carlos would heighten his intellectualism and do everything to avoid expressing himself. It was a toxic pattern. What was really happening was that Hrishi was attacking the parts of himself that were self-reliant and intellectual. To him, these were negative traits. Carlos was attacking his own feelings of neediness and emotionality. They attacked in the other what they could not stand within themselves.

The work for this couple was in Hrishi addressing his own insecurity about his intelligence, independence, and problem-solving abilities and beginning to accept these traits within himself. Similarly, Carlos needed to examine his own difficulties with emotions, need, and connectedness. Relationships can, and I think should, be places of growth, creativity, and expansion. Therapy was not about getting each person to control these aspects of themselves, that would be stifling. Rather, together the couple could begin to see how these parts of themselves that they had disavowed as unreliable, intolerable, and bad, were not only okay, but they were attractive and valuable parts of the other.

Consider your own relationships throughout your life. Many times the traits that bother us most in our partner(s) are ones that we ourselves possess but are uncomfortable with. (It’s often the parent that we are most similar to that we have the weakest connection with). If you find yourself being disproportionately affected by something that your partner does, ask yourself what about it makes you uncomfortable. You may not always know the answer, but it’s an important first step to lessening the triggering effect these things can have. Ultimately this can lead us down a path of greater understanding of the old internalized messages that we received about what is good or bad, and we can then begin to shift those beliefs into something healthier. Opposites often do attract, but like Carlos and Hrishi, we can acknowledge that what bothers us in the other person is likely something we need to strengthen in ourselves.

Posted in RELATING
← Making Room for AngerAdulting as a Woman in the Bay Area: Turning 30 (and What to Do About it) →