I am riding on the back of a tuk tuk, a small, motorized three-wheeled vehicle ubiquitous in the streets of Southeast Asia. I’m about 16 miles outside of Siem Reap, Cambodia, and I’m alone except for Mr. Laim, my tuk tuk driver who I have known for a couple days, and the people we are passing on the road, living in the countryside. I cannot believe I am here headed to a “waterfall temple” somewhere in the jungle. I have never traveled alone before. Many beliefs and feelings riddled with fear could have prevented me from getting here. Those same beliefs and feelings could keep me from being here now – from taking in the lush, vibrant green of my surroundings, the still air and from letting the exhilaration birthing inside me trickle in. 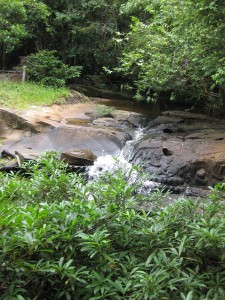 During my first days in Siem Reap, I received a tip from a fellow traveler from Denmark. He sang the praises of an ornate temple and waterfall, not to be missed, he insisted. That morning when Mr. Laim arrived at my hostel, and asked where I wanted to go, I could not recall the exact name of the suggested temple so I requested the “waterfall temple,” did he know it? Before long we were headed straight out of town. This was unexpected. In my two days in Siem Reap I had come to rely on twenty minute tuk tuk rides to the grand Khmer temples, which all appeared to be in the same general vicinity. At this point we had been driving for almost an hour and I was warding off some serious feelings of unease. Myopia set in, the scene was no longer sharp and abundant, but slowly narrowing and flat. These were the very feelings I had battled just to get on the plane. “What are you doing?” “This cannot be safe.” “Who is Mr. Laim anyway and where is he taking me?” I asked myself. Don’t get me wrong these are good questions and exercising caution in any number of unfamiliar situations can go a long way.  But, these particular thoughts were old and rotten and they needed some major airing out. In fact, I had come to Southeast Asia to practice letting them go and to take myself out of the safety zone I had built up for myself.

When we finally arrived at our destination, Mr. Laim pointed upward. I watched as he unraveled his hammock, which was attached to his tuk tuk for resting while he waited for my return. When I looked up I quickly realized that I had to hike a steep mile into the jungle in order to get what I came for – to see the “waterfall temple”. I wouldn’t see Mr. Laim for another 2 hours. Living in California I was well prepared for the remote possibility of encountering a mountain lion when entering our state parks, but what animals lived in the Cambodian jungle? “Damn” I thought, here it was again, the uncertainty of life staring me down. Uncertainty can either fill us with fear or engage our curiosity. Do I turn back or propel myself forward? How do I choose?

I made the decision to travel solo to Southeast Asia not from a place of fear, but from a place of deep knowing. During this era of my life this place challenged me to choose curiosity over fear and to meet myself on the other side. I trusted this challenge as it felt like me, like who I wanted to be, like who I knew I was. This place is a source of truth that resides in all of us. In humanistic psychology it is known as our “actualizing tendency,” – the idea that within each of us lives an innate drive to fulfill our potentials.

Our ability to access and stay connected to this place is essential in owning our truths, and in reaching our ambitions and unique altitudes of personal development. Often the pathway to this voice gets jungled, verging on impenetrable, because of wretched cultural messages, disappointing relational and traumatic experiences, stifling belief systems, and self-defeating patterns. The aim and heart of psychotherapy is to assist clients in clearing their path and following their truths for the purposes of increased life fulfillment. This process is known as self-actualization. As we traverse the various stages of self-actualization in our lives we are transformed. With each layer, we grow and heal and discover our most authentic selves.

Certainly I did not need to travel to Cambodia, ride on the back of a tuk tuk and land at the mouth of the jungle to learn this lesson. At the time I had the resources to go and so I went. The practice of saying goodbye to fear and hello to curiosity would be with me no matter where I was in the world and there would be plenty of opportunities to flex this muscle. It is more than okay to turn away from some and imperative that we go at our own pace.

In this instance I chose to press forward into and through the jungle (through is really the only way out). It was hot and steamy. As I ascended stepping on tree roots and various rock formations I felt renewed. Mr. Laim had not abducted me, I did not meet any wild intimidating animals in the jungle, instead there were big butterflies and strange iridescent beetles. With each step I found myself eager to know what I would discover next. As I climbed the final steps of the humid path, the waterfall opened up before me, and there it was: a small trickle of water with no ornate temple in sight. Because of the time of year the river was somewhat dried up so the water was not flowing heavily. And as it turned out, Mr. Laim had taken me to Kbal Spean an archeological site filled with carvings of stunning Hindu deities and linga in the sandstone of the riverbed and banks. But, I wasn’t disappointed at all. It was a privilege to travel in Southeast Asia and familiarize myself with the histories, customs and cultures of the region.

On our way back to the hostel, on the back of the tuk tuk, I took it all in. I was elated and fully seated in myself. I laughed and smiled all the way on our return to town, the provincial parameters of which I clung to tightly only a few hours ago.

Samantha Yugler is a Licensed Marriage and Family Therapist and writer in the Bay Area. She has been working in community mental health for the past eight years and is a humanistic and relational psychotherapist that works within a social justice framework. She has private practice in Downtown Oakland.

Posted in THE REAL YOU and tagged adventure, Authenticity, fear, inner truth, self-actualization, travelling alone, trust, trust your struggle
← Self-compassion just might save your lifeThe Seven Deadly Sins and Shame: A Foundational Approach →