David Bowie died last week, at the age of 69, after living with cancer for 18 months. It hit me harder than I had expected. I think part of my grief came from shock and disbelief, since a general consensus among my friends is that none of us believed David Bowie could ever die. 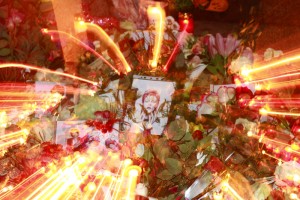 He was a strange and immortal visitor from another planet, an artist who made it possible to break barriers and thrive, inspiring others to do the same. He helped people trade shame for courage, and come out about gender, sexuality, desire, and creativity. His lyrics talked people out of suicide and toward the possible. He championed orange hair, glam fashion, and continually reinvented himself. He inspired countless astronauts, scientists, “spacemen” and “starmen” to explore uncharted territories, and envision our place in infinity, and infinity’s place within us.

Bowie was (and remains) a reflection of some part of ourselves that can harness shame and fear and transform it into the creative power of what’s possible. His artistry can be an opportunity to explore our strange and idiosyncratic ways of knowing ourselves and being in the world.

In short, David Bowie was a weirdo who inspired others to be their weirdest, fullest, most creative selves.

As I listen to well-loved albums this week in tribute to his passing, I am starting to make connections between Bowie’s lyrics and some of the reasons I became a therapist. As I listen to the track Rock n’ Roll Suicide from the album Ziggy Stardust, I can think of specific people in my life about whom I’ve thought:

Oh no love! you’re not alone
You’re watching yourself but you’re too unfair
You got your head all tangled up but if I could only make you care

If there’s one thing I’ve learned in my experience as a therapist, is that I can’t make anyone do anything. But so many people, in their fear and loneliness, believe that they are alone, misunderstood, unworthy, and disconnected from love, support, and contact. If I can be human with you, and think with you, and listen deeply not only to your words but to everything that is being communicated, perhaps healing can happen. I believe Bowie knew this, too, and I can only imagine the number of people who were coaxed back from the brink of suicide by these words:

I’ve had my share, I’ll help you with the pain
You’re not alone!

I am human and I have felt pain. We all have, and this is what connects us. What we do with that pain differs, but your therapist can help you make sense of, embrace, and put language to your feelings- even ones that feel strange. Your therapist is someone who is not afraid to be with you in your emotional landscape because she knows that as human beings, we are uncannily connected in our weirdness and our pain.

In a way, these lyrics from All The Madmen:

I have learned to embrace the weirdness in the therapy room. The unconscious speaks in strange, sometimes uncanny ways, and you have to listen to the weirdness to hear it speak. Therapy is a way of creating space for a person’s unconscious mind to wander into whatever territory it desires. This is how non-directive, analytic therapy can be so useful- it can open up exploration beyond our expectations.

People often say they feel anxious about discovering things inside them that don’t make sense. They tell me about this anxiety usually by talking about mental health stigma, feeling like their friends and family dismiss or criticize their desire for therapy, and by saying that they don’t actually need therapy- they can do it on their own.

We seem to defend so much against shame and fear that we tend to forget about curiosity, playfulness, and the joy of growth.

I’ll tell you this about weirdness in therapy: Your therapist is not listening to your weirdness in order to shame you. She’s listening to your quirks, the things your unconscious is telling both of you about who you are and what needs to be witnessed and held, because this is what’s most truly you. So much of the work in therapy is sifting through what you’ve been carrying for other people: the projections of your parents (who they want you to be, and what they can’t tolerate in themselves) and your expectations of what others want from you.

If being weird is being yourself, it is necessary. Your weirdness will open you up to opportunities you never thought possible. Let it in, let it out, and let it change you.

Ch-ch-ch-ch-changes
(Turn and face the strange)

Turn and face the strange in therapy. Then you can decide whether you want to change- or stay the same- or become you, weirdness and all.

*Note:
In a piece about healing-and-becoming, it is important to acknowledge what became clear after his death: Though David Bowie seemed to transcend mortality to many of us, not only was he physically mortal, he also made sexual decisions with young people wherein he abused his power. It is one thing for people with power and fame to stir the awakening sexuality of youth, and quite another for those people to act on it. While this abuse history does not necessarily detract from his artistic legacy, it may feel too painful for some readers to separate the fallible human from his creative works, and it is important to make space for this experience also.

Posted in PLAYING and tagged David Bowie, unconscious
← We are Legion: Using Internal Family Systems (IFS) in TherapyHow to Make Friends as an Adult →