This is what I know this morning,

There is nothing like waking up to a private message from some guy you’ve never met, never had a one-night stand with, and whose profile picture is a cartoon version of himself.

He felt the need to tell me IN ALL CAPS that I was a cunt for convincing “a guy” to vote for Hillary. His exact words: you are a cunt.

I did not accept his message. It went straight into the shock and awe and delete pile. But I am writing an open letter to him, so, here goes: 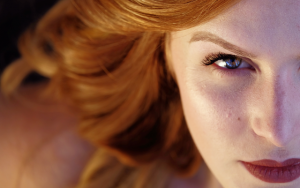 First of all I am not a cunt. As much as I deplore that term, as much as it gives me the heebie jeebies, I feel the need to correct you: I am a queen-bee motherfucker cunt. I am the kind of woman they name hurricanes after.

I don’t mind your ignorance, because my guess, just like a pre-existing condition, it’s something you’ve always carried around – maybe a little embarrassed to give full acknowledgement to, I mean, after all, ignorance can be somewhat disguised. What I do mind is that you now think, believe, that you have some kind of power, that you’ve been given permission – a green-light – to be vulgar, and cruel and vicious and that you have the right to spew words that cut deep. Way deep. Heart deep.

My mother had a similar style; she would toss words at me that were vicious, unkind. Bitter-filled and mean. For years, I mistook her anger and rage as power. I thought she was the most powerful person in the world.

Turns out, she was unhappy. Miserable. She was so profoundly insecure and her bravado was simply a mask to cover it up. She had to cut people down to feel tall and big. So, I know all about that ball of unattractive wax.

But I also wanna share something with you that happens to folks that carry around too much mean, too much cruelty, too much hate – they die with regrets, and very often alone.

So, Mr. Cartoon profile man, I wanna give you a piece of advice: at the end of my mother’s life, when dementia grabbed hold and didn’t let her go, when it had her in headlock – she was filled to the brim with regret and sorrow and fear.

You could see it.

It was in her eyes, in her frail body, in her skin. You cannot put makeup on regret. You cannot pull a wool cap over it; you cannot cover it up in fancy clothes and sparkly jewelry. Regret is one powerful motherfucker.

One of the last things my mother said to me – in yes, a complete & astonishing moment of clarity – was this: “I didn’t want anyone to love you, I wanted everyone to love me.”

Thankfully, by that time – when she revealed that truth to me – I didn’t need her love, I had buckets full of love. But how sad and tragic for her.

So, my advice to you and all your nasty-ass friends who think that hate has made a whopping come-back and now you can be that angry vicious intolerant man that you have longed to be, wanted to be – a hint: it’s not such a good thing to be a mean human.

Being mean is not power. It’s intimidating and manipulating and contrary to all rumors, all fucking rumors, it does not shake the universe.

It breaks hearts and ruins lives, it shatters dreams and disrupts humanity, and it doesn’t age well. And I have news for you, you are not gonna stop me from being kind, or being generous, or being sassy or lending a hand or even giving a few bucks to someone who doesn’t have enough money to pay for their groceries or their baby diapers.

You pissed me off, you scared the shit outta me, you gave my heart a huge jolt, you used a word that made me quiver and put a bit of fear in me, but you are not gonna stop me from sprinkling good shit everywhere.

And just one more thing before I go: I hope you find love.

Amy Ferris is an author, screenwriter, editor and playwright. She has contributed to numerous magazines and anthologies, and her memoir, Marrying George Clooney, Confessions from a Midlife Crisis (Seal Press, 2009) was adapted into an Off-Broadway play in 2012. Ferris edited the anthology Shades of Blue, Writers on Depression, Suicide and Feeling Blue (Seal Press 2015), co-edited the anthology, Dancing at the Shame Prom (Seal Press, 2012), and authored the young adult novel, a greater goode (Houghton Mifflin, 2000). Ferris has written for both film and television, and was nominated for best screenplay for the film, Funny Valentines (Julie Dash, Director). She serves on the advisory board of the Women's Media Center, and on the Board of Directors of Peters Valley School of Craft. She did not graduate from Princeton or Yale or Vassar, but she does have her GED, and is quite proud of what she has accomplished with her life. She lives in northeast Pennsylvania with her husband, Ken.

Posted in CULTURE and tagged Anxiety, Boundaries, cunt, Depression, Donald Trump, Election, misogyny, racism, racist, Shame, Trauma, Trump, Vulnerability
← Stronger Together: The Search for Ground and Truth in the Aftermath of the ElectionGroup Therapy: The Magic of Coming Together →