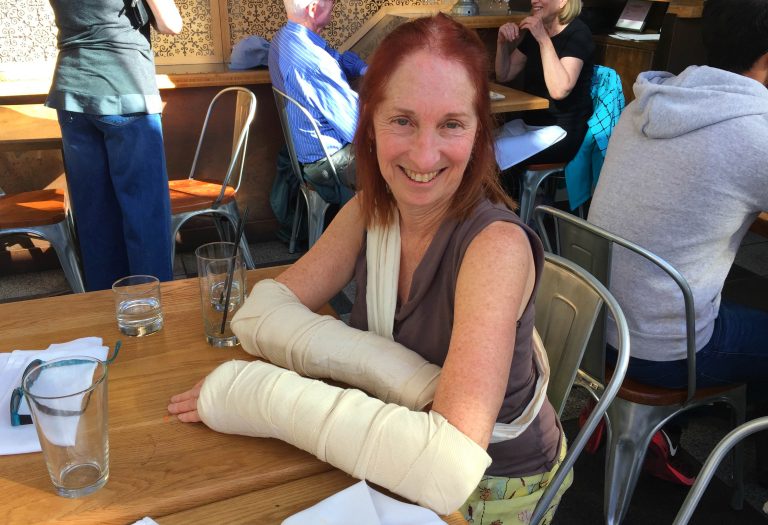 It’s amazing how many things we do with our hands every day that we take for granted. It brings up that old adage that you don’t know what you’ve got until you lose it.

Through the grace and fortune of some of the best medical care on the planet, my wife, Elizabeth, will eventually get the use of her hands back. But for now, it’s a lesson for her in helplessness, dependency, and pain.

How did it happen? Like so many things, in a rather simple and commonplace way. We actually don’t know exactly, but Elizabeth was on a steep sidewalk, having a happy conversation on her cell phone. She turned to wave to a friend and somehow lost her balance.

There’s an automatic response called the Moro reflex that makes you put out your hands to protect your head when you fall. It’s wired-in. You can’t not do it (though with training you can learn to redirect it, for example into a roll). So, with the additional force of falling downhill onto concrete, Elizabeth shattered the radiuses of both arms close to her wrists.

Oh how quickly life circumstances can change and how easily we forget all the amazing capacities we normally rely on.

After eight hours in the emergency room to set and splint them, and then surgery the following week to install hardware to stabilize the bones while they heal, Elizabeth was unable to use her hands or arms for almost anything. Here’s a short list of the things she couldn’t do (and by extension, which I or someone else had to do for her continuously, every day):

-feed herself, from snacks to meals
-take pills for the pain (every 4 hours)
-arrange pillows or bedding for comfort or to get in or out of bed
-use the bathroom (including several times overnight)
-open doors, including letting friends, helpers, etc. into the house
-open mail, pay bills
-drive (or even open the car door, buckle herself in)
-bathe or wash her hair
-dress, undress, adjust clothing
-put her glasses on or take them off
-read a physical paper or book
-carry her cellphone
-operate anything other than screen or voice commands of a cell phone (not enough strength or too much pain to operate the power switch, volume buttons, etc.)
-use remotes, buttons, or knobs to operate TV, stereo, etc. (same problem as above)
-pet our dog

Obviously, huge classes of larger activities were out of the question: work, exercise classes, shopping, household maintenance tasks, and so on.

One way of looking at roles in relationships is through the concepts of symmetry and complementarity. In symmetry, both partners act in similar ways that match each other. In complementarity the roles can be opposites, fitting together like puzzle pieces.

My wife’s injury introduced a strong new complementarity into our relationship. On her side, she felt a huge sense of helplessness and dependence on me for so many things she normally would be able to do for herself. Coupled with that was boredom at being in many ways confined to the house and being able to do so little for herself.

On my side, I felt an anxious and overwhelming pressure to be continuously available for her every momentary need or whim, and an exhaustion at the proliferation of tasks while filling in for her vacant dexterousness—much less the things she normally does for both of us.

While we scrambled to get caretakers whom we could trust, there were several days where I had to be available all 24 hours to help Elizabeth with virtually everything.

We went through the various stages of grief with each other: initial shock and disbelief, wishing it hadn’t happened or that it could have been controlled somehow, anger, sadness and mourning at the losses. In such traumatic circumstances couples have a choice: you can either recognize your mutual pain and accept the shared hardship, or you can turn against each other, amplifying the misery.

Most of the time our love for each other and the simple necessity of the situation carried us through, but occasionally our frustrations would break through into irritability, which we then had to talk through and accept. Now we are careful to express our frustration and annoyance as such rather than turning it into personal attacks, and we apologize as soon as possible and commiserate together on what a sucky situation it is all around.

Although she’s normally a very grateful and appreciative person, I thought about Elizabeth’s experience and realized that her pain and helplessness didn’t allow her the room to express much appreciation for my help, which made an already difficult job rather thankless. On the other hand, she so frequently apologized for asking so much of me that I just felt sadder and more burdened.

At one point, I asked her if each time she felt the impulse to apologize, she would thank me instead. That felt much better.

In addition to bringing into relief many of the things we normally take for granted, this experience also gave me some insights into physical pain. At one point when I was carrying some heavy bags home I noticed the pain of the thin handles bearing on my hands. Though far milder than hers, the discomfort reminded me of the pain Elizabeth was in.

I felt a kind of solidarity with her, and by extension, with all the other people in the world who were in pain—whether chronic or temporary.

It alerted me not only of my providence in having comparatively little physical pain in my life, but to be mindful of others who are not so fortunate.

In the end, our temporary burden is dwarfed by conditions other people face. A friend of mine used to say—Yogi-Berra-like—“Your biggest problem is always your biggest problem.” By this he meant that we tend to measure the scope of our problems on the scale of our own concerns.

However, our own concerns can also remind us to be grateful for all the things we do have, and to remember the suffering of others—from our partners to all other beings.

Posted in RELATING and tagged couples, Empathy, give love, love
← Everything Is Not OkayBigger and Bigger and Always Black →