It’s the year 1985 and the self-proclaimed “richest and most powerful man in America” has arisen in the nation’s spotlight as an example of the pinnacle of American greatness. He resides in an opulent 27 story Vegas-style Casino, fashioned with his name and face emblazoned in brilliant lighting. He sits on a golden throne-like chair in his palace, wearing lavish clothes, surrounded by luxurious furniture and hot tubs with acquiescent women, and flanked by a regal portrait of…himself.

And just who is this man? Not Donald Trump, as a modern 2015 audience might think at first glance, but Biff Tannen from the movie Back to the Future Part II.

Yes, this nearly 30-year-old movie portrayed the enormously wealthy character with an uncanny likeness to the present day GOP presidential candidate, and the parallels between the two are striking. Watching Biff in his “Biff’s Pleasure Paradise” casino hotel (think of Trump towers), sitting in a high-backed chair making demands of his 3rd wife Lorraine, one is reminded of Trump from the long-running show The Apprentice, yelling “You’re Fired!” And oh, THE HAIR. 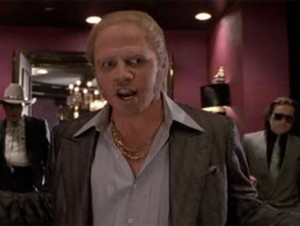 In the movie, Biff Tannen has used his wealth to transform 1985 into a living nightmare. He manages to get his wealth and power by traveling back in time and giving his younger self a sports almanac from the year 2015. Past Biff uses it to bet on the results of sporting events. Soon he becomes one of the richest and most powerful men in America. Biff lords his financial empire with complete authority over the local law enforcement. He also has a real estate firm, which is implied to be intimidating several residents into selling their property (Marty finds a Black family living in what was originally his house, and the father chases him out with a baseball bat, shouting “We ain’t gonna be terrorized!”). Through his own promotional videos, Biff is portrayed as one of America’s self-made heroes, while the city surrounding his palace has turned into a breeding ground for crime, corruption, and gang warfare, complete with barred windows and trash can fires.

Donald Trump strikes one as similarly callous towards those on whose backs he climbed to build his empire – women, minorities, immigrants. He is wealthy because he is the son of real estate tycoon Fred Trump. Fred Trump’s business success not only provided Donald with a posh youth of private schools and economic security, but eventually blessed him with an inheritance worth an estimated $40 million to $200 million.

Fred Trump’s success, which granted Donald such a great advantage, was enabled and buffered by U.S. governmental financial support programs. During the Great Depression, financing from the Federal Housing Administration (FHA) allowed Fred Trump to revive his struggling business. Donald eventually took over his father’s business in 1971. In 1990 the Trump Organization was in serious financial trouble due to excessive leveraging. The survival of the company was made possible only by a bailout pact agreed upon by some 70 banks. Nevertheless, Trump fails to recognize the socio-economic privileges he was born into or the government’s financial support, and continues to express his belief that he did it alone. Like Biff Tannen, Trump has also failed to acknowledge anyone but himself in telling his success story.

When the movie was released, Back to the Future Part II’s depiction of an egotistical power hungry tyrant running a dystopian hellscape seemed comical and outlandish, showing an alternate future in which Marty McFly’s world is an unimaginable nightmare. Yet as the similarities between Biff and Trump present themselves, the world of satire and the world of reality start to become closer and closer.

Others have also noticed the similarities between Biff and Donald in appearance, social position, and power tactics. But below the surface, both figures also display strong characteristics of narcissism.  The worlds they create around themselves are typical of narcissists who hold positions of leadership. Trump’s presidential campaign at first was as comical as Biff’s mixed metaphors, but his continued high poll numbers reveal America’s own narcissism, and our wish to have a Biff Tannen running the show. As Trump continues to linger high in the polls, what was comedy is threatening to become a dystopian nightmare.

It’s easy (especially here in the progressive Bay Area), to point our fingers at Trump and his flagrant narcissism, insisting that we want nothing to do with such maniacal grandiosity. But in order for a Trump candidacy to truly die out, We the People need to begin looking at our own narcissism that breeds candidates like Trump in the first place.

In brief, narcissism is a set of defenses that protects an individual from feeling small, insignificant, and worthless. The classic narcissist is big, loud, pompous, and condescending. In narcissism, there’s only room for one person, one “self.” So narcissism often looks like the classic grade school “making others small so I can feel big.” The narcissist himself isn’t aware of the small and scared feelings underneath all that grandiosity, and others around him only feel them unconsciously. When we’re around these kinds of narcissists, we might feel like we’re in the presence of something great, but it always comes with a nagging sense of worthlessness or smallness in ourselves. This is called “Projective Identification”— the process by which we (the non-narcissist) feel the feelings that the other person cannot admit to.

There are actually two kinds of narcissism: Inflated and deflated. Inflated narcissism is what we most often picture (as with Donald Trump and Biff Tannen). These are the big, strutting, haughty clowns that make the news (or the movies). Deflated narcissism holds the opposite belief: Everything I do, and who I am as a person, is fundamentally broken and wrong. Deflated narcissism says, “I need to be in the presence of someone great to be worth anything at all.”

Often these two pair together. And that’s the Donald Trump/ America romance. We as a nation are terrified of feeling small, worthless, and (inter)dependent on others, so we tend to latch ourselves to leaders who promise power, strength, and complete control. Our collective narcissism says, “If we are not THE GREATEST country, THE STRONGEST, then we are nothing.” With Trump, it’s particularly Whiteness and Maleness that is The Greatest Thing at the expense of the female, the Brown and Black, the elsewhere-born, the Queer (and it is baffling to the authors of this piece how Trump has any non-White, straight, male supporters).

The pull of the inflated narcissist is the glorious promise that “With me, you won’t have to think and you won’t have to feel.” This is what people are responding to with Donald Trump, and this is the appeal of a narcissist in any leadership position, whether in government, church, or academia. Self-reflection and critical thinking are terribly hard; And when you live in a country that is 18 trillion dollars in debt, coming out of two horrendous wars, poisoning the planet, and supporting sweatshop labor in other countries through our constant consumerism— well, not thinking and not feeling has its appeal. Trump promises us four years of not having to think about all that horror.

But the nightmare of narcissism is, you don’t get to think. Since narcissism only has room for one, any other’s thoughts, feelings, and critiques are unwelcome. Biff Tannen required Lorraine to cater to his every wish, to meld her desires (including her desires of what to do with her own body) with his. In Tannen’s mind, Lorraine has value only for how well she pleases him and upholds his narcissism. A President Trump would demand that of his staff, and, more broadly, of the rest of the world. If a staffer, a constituent, or another nation does not do its part to uphold America’s Narcissism (our own belief in our greatness), then they will need to be punished, even obliterated.

Having a narcissistic leader is dangerous. The American Dream of having someone else think and act for us will surely turn nightmarish (if it hasn’t already). The fact that Trump’s candidacy is still happening reveals our own fragile, deflated American narcissism. We are desperate to see displays of power and conceit because, deep in our collective unconscious, we are terrified of being small, weak, and helpless.

So how do we avoid a Biff Tannen/Donald Trump presidency?

The way out of narcissism is grief.

An individual with narcissistic defenses must acknowledge the deep shame and inferiority that drives his or her behavior, and grieve the circumstances that caused those feelings in the first place. As a narcissistic nation, we must grieve what we’ve done to our precious brothers and sisters who come from elsewhere seeking a better life, grieve what we’ve done to the planet that might not be able to be undone, and grieve the world we’re leaving our children. We must grieve how long it took to recognize women— first White women, and much later, Women of Color— as people deserving dignity and rights (this is still in question whether we believe this. Trump apparently does not). We must grieve that we still see the queer and especially the transgender community as worthy of hatred and violence.

Grief always leads us to a place of recognizing our fallibility, our fragility, and our interconnectedness. Through grief, we will begin to want a president who does not see America as THE GREATEST NATION ON EARTH, but as inexorably linked to and interdependent on every other nation. We need someone who can recognize the true and equal humanity of those who are different from us. We need someone who listens to those who speak quietly, thoughtfully, and slowly, not just to those who shout and throw around the most money.

The joke is over. Trump’s candidacy for president is revealing our American narcissism to the world. If we want a chance to continue surviving, not as THE GREATEST NATION but as a country who takes care of its people and who acts thoughtfully, ethically, and interdependently, we must begin to acknowledge our fragility and our past wrongs. When we do that, a Donald Trump/Biff Tannen presidency will die a natural, and hopefully quiet, death.

Giancarlo Scherillo is a Licensed Marriage and Family Therapist in private practice in San Francisco. He work focuses on applying mindfulness techniques with somatic therapy approaches to support his clients process. Giancarlo works with a wide range of emotional and behavioral issues and specializes in working with men’s issues, multicultural/ethnic issues and cultural adjustment, as well as with families and professionals in the special needs community. For more information, you can visit his website: giancarloscherillo.com.

Posted in THE REAL YOU and tagged 2016 election, Back to the Future, Biff Tannen, Donald Trump, grief, Narcissism, Politics
← Eliminating “Negative Emotions”Do Black Lives Matter?: An Analysis of the Hit Show “Fear the Walking Dead” →