Any woman who chooses to behave like a full human being should be warned that the armies of the status quo will treat her as something of a dirty joke. That’s their natural and first weapon. She will need her sisterhood. –Gloria Steinem

Have you ever been afraid of being called “The B word”? I know I have. As someone who is attuned to relational dynamics, asserting my own voice, when I fear it may not be well-received, can be a challenge.

As a friend of mine says, “When you stop people pleasing, people aren’t pleased.” As a woman, it can be especially difficult to express anger because we are often socialized from a very young age to prioritize relationships with others, and being “nice,” above self-care. 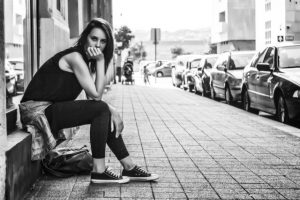 For girls, the indoctrination to be good (aka not angry, aka not a “bitch”) often starts young. Remember that Henry Wadsworth Longfellow poem?

Once there was a girl, and she had a little curl
Right in the middle of her forehead.
When she was good, she was very, very good.
And when she was bad, she was horrid.

Apparently being “horrid” later in this poem entailed standing on her head in her bed and “hooraying with her heels.” Here is a real-life story about one good little girl (shared with permission): Once upon a time, there was a little girl. On her first day of preschool, the little girl’s Mom had to leave, so the little girl kicked the teacher in the face. Her Mom, embarrassed and ashamed of her “bad” little girl, left. And so the little girl started constructing her “Good Girl” mask. Because in that moment, the association she made with getting angry was: If I get angry, I get abandoned.

Eventually, only anorexia helped this girl restrict her anger and maintain her “good girl” persona.

So many of the adult women I work with in clinical practice have this abandonment association with anger. They were taught in their family, and in their culture, that if they are angry, they will be abandoned. Or, if they get angry, they better not show it, because it makes the other person (parent, spouse, opponent for presidency) uncomfortable.

Girls (or women) are supposed to be sweet. Or sad. Girls can’t be angry. That makes them “nasty” or “a bitch.” And who wants to be friends with, marry, or vote for a bitch? Let’s look at more dangers of being “too nice.”

Having A Voice Includes Owning Your Appetite, Your Anger, And Your Power

What happens when we create these masks of “being good” and split off from angry parts of ourselves? Have you ever noticed that Hello Kitty doesn’t have a mouth? She literally can’t speak and can’t eat. And yet her popularity among little girls, along with princesses with waists a quarter of the size of their heads, continues to soar. When an appetite is not allowed and anger is not spoken, these natural impulses and emotions turn inward against the self.

When anger and power aren’t allowed to be expressed, what happens? What happens is The Second Shift, Mommy Wars, and only 4% of the top leadership positions of fortune 500 companies being held by women. What happens is a woman running for President who speaks directly with fierceness during a national debate getting called “nasty.” What happens is less than 20% of women holding positions in the United States Congress in a country whose population is 50.8% female.

When women are not allowed to express their anger, what happens is anorexia, bulimia, depression, binge eating, anxiety, and a culture that tells women they can only talk about their uncomfortable feelings if they are encoded with the word “fat.”

Why do women experience uncomfortable feelings as feeling “fat”? Fat is not a feeling.

In a world where the feminine is valued, so is health at every body size and shape. Being “thin” or “not thin” does not equal a woman’s value. In this world, listening to our hunger becomes something to trust rather than fear. I will end with this quote from Geneen Roth, author of many books on making peace with food and your body:

“When we give up dieting, we take back something we were often too young to know we had given away: our own voice. Our ability to make decisions about what to eat and when. Our belief in ourselves. Our right to decide what goes into our mouths…your body is reliable. It doesn’t go away, get lost, stolen. If you will listen, it will speak.”

Your body knows what it feels. And there is nothing wrong with those feelings. Your body is not the enemy. It never was. May you listen to your anger–and your hunger–with compassion and curiosity.