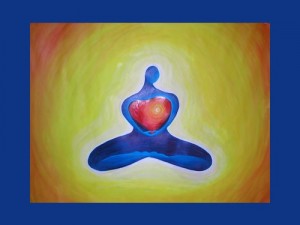 Creativity is the original anti-depressant.  -Andrew Brink, Creativity as repair: Bipolarity and Its Closure

It is only in being creative that the individual discovers the self.  -D. W. Winnicott

Every child is an artist. The problem is how to remain an artist once we grow up.  –Pablo Picasso

1. Art (re)connects with the authentic self.

The well-respected psychoanalyst D. W. Winnicott coined the terms “True Self” and “False Self” that children develop as a result of their attachment to early caregivers.

As adults, the false self, the one that needed to be compliant as a child, can become maladaptive, stunting the power of the true self. One woman, recovering from an eating disorder that had her acting pleasing towards other people in her life while stuffing down her anger with food made the following images: 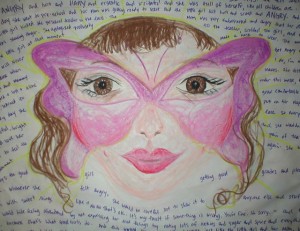 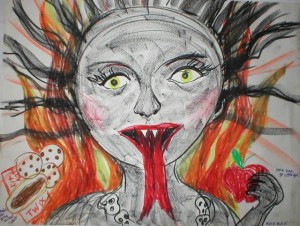 Creating these images helped her begin to externalize the mask of the false self and express rather than stuff and repress the anger that was keeping her stuck in the cycle of her eating disorder and depression.

2. Art can be meditative.

Art connects you with a state of flow. The Psychologist Mihaly Csikszentmihalyi dubbed the state of deep concentration that people experience when they are fully engaged in a task that brings pleasure “flow.” When I am fully in the process of painting, collage making, or dancing (it doesn’t have to be visual art-making- any creative task can induce this state, even cooking), my critical mind is quiet. The never-ending “to do” list of what should be getting done or how things should be different than they are is silent.  Sometimes my clients will say “But my critic gets LOUDER when I make art!” which leads me to…

I noticed recently when I attended a conference and was participating rather than facilitating expressive arts that I found it difficult to get started. The materials weren’t right, my critical voice was yammering away, and it took me quite a while of just staying with the process to have my mind quiet. Is this true in my life? YES! I am often “slow to warm up” in feeling safe enough to land in my body and emotions free from the overdeveloped commentary of my superego. If your critic is especially loud when approaching art making, this probably means you have a loud critical voice! It is not about the art. You might say “But no, with me, it IS. It IS about the art…” and then go into a convincing story about how and why this is the case. I invite you to notice what happens then to the art making: it doesn’t get started! That is because a large part of the critic’s job is to keep you from engaging fully with your life, and so of course it does the same thing with your art. Notice when you begin actually engaging with the art making if it quiets.

4. If your critic doesn’t shut up, then you can include it in the art.

I invite clients to either make an entire art piece about their critic (aka overdeveloped Superego or the-part-of-the-self-that-unceasingly-judges) or include the critic in a small part of their art. The critic is an important part of the self, usually serving as a protector for more vulnerable parts. Once you invite this part what it has to say, you may discover what part(s) it has been protecting. One of my clients made a collage of her body image critic- she named it “Editor of Vogue.” Once this part of the self had a name and a voice, other parts, such as the young child who had been teased and shamed for having a skin condition could begin to re-emerge and speak. 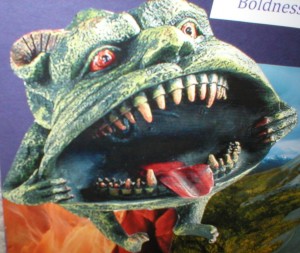 Another client made a collage image of her eating disorder, aka “ED.” Having an image of this part of the self allowed her to dis-identify enough from it to begin to allow a different relationship with her appetites. She began to see how “ED” was a monster, but her hunger, her feelings, and her true self were not monsters.

5. Art speaks directly to the heart and can hold many seemingly 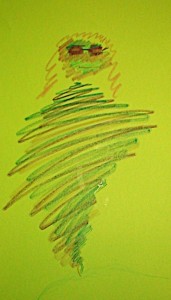 When you look at art, it often evokes an emotional or visceral response. In this way, it can communicate more effectively, fully, or quickly than words. It can also be more than one thing at the same time. One client, in speaking from the voice of her art therapy image named “Pink Elephant,” shared that it said “I want everyone to ignore me so I can disappear; I need to feel that someone sees the true me and will fight for me. I feel like a tortured soul.” Making and sharing this art with me as her therapist helped me understand her internal experience from her family of origin much more quickly and viscerally than she could have with talk therapy alone.

Carrie Barron, MD, and Alton Barren, MD* in their book The Creativity Cure cite a vast list of characteristics that mentally healthy and people who engage with creative practices share. Some of them include: autonomy, openness, flexibility, humor, realistic self-assessment, ability to cope with or adapt to change, freedom from dependence on outside circumstances for happiness, ability to pause impulsivity and accesses unconscious material. As a clinician, I can see implications for how this can assist healing with a variety of “disorders,” including codependence, depression, anxiety, obsessive compulsive disorder, eating disorders, and alcoholism.

And as a human being, I can look at this list of healthy personality characteristics and ask Ummmmm, who doesn’t want to embody that?

* Based on the research of Dr Arthur Cropley, Dr Silvano Arieti and Dr Mihaly Csikszentmihalyi

Note: All images in this article are shared with permission and are copyrighted.

Posted in THE REAL YOU
← #TBT on PsychedinSF – In Defense of AddictsCreativity: 5 Practices For Holding On to Your Creativity →