In the first installment of my Primer on PTSD, I laid out some of the aspects of PTSD from a diagnostic framework, as well as some of the forms it takes—how trauma actually impacts peopleʼs lives. Here Iʼll focus in on a few examples, painting with a broader brush some emotional and mental problems that people live with when trauma impacts them. These are human dilemmas, and we often acclimate ourselves to them and normalize them; they arenʼt often associated with traumatic experience. They become the conditions we take for granted. 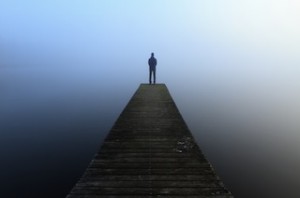 Trauma narrows our field of awareness, keeps us from the big picture perspective view of life. As such, trauma thatʼs been lodged in the nervous system means we carry on as best we can, without stopping to repair. People survive but donʼt have awareness of the extra energy they expend in just living life, in order to compensate for their trauma. Trauma can also bring a dissociative splitting of experience. This makes sense if we imagine a psyche whose naturally adaptive capacities were overwhelmed by stress at a young age. Intrusive force is dealt with by fragmenting of the experience.

Here are a few examples from people Iʼve worked with over the years. Iʼve changed details to protect their identities but their stories offer examples of troubling everyday life problems that are difficult to solve, and connect back to traumatic experience.

• Trauma hijacks us from being in present time, aware and “awake,” and creates a preoccupation with the past. This could be memories of past experiences, fantasies of what might have been or sometimes just a preoccupied sort of mental drift. A preoccupation with the past makes living and working in our daily lives challenging, with the dissociated mind dissociating and wandering off into distraction and away from focus and flow.

Joe was a mid-30s man who began therapy to deal with vague but persistent memories of childhood abuse, the nature of which were unclear to him. It seemed his system was trying to organize and bring something into awareness. He was dealing with daily uneasiness and agitation, and an inconsistency of focus.  But he had a strong determination to clarify his thoughts, and to carry on with what had once been his full capacities. These capacities had been formidable earlier in his life, both with his career and artistic pursuits. It frustrated him enormously that he seemed to be sliding backwards as his past trauma caught up with him and made it harder and harder to create meaningful work.

As a young man, Joe had gained many personal and professional skills and tackled many developmental challenges in his life, but he also coped with dissociative states and emotional states of overwhelm. Heʼd find himself staring off into space, or have strong feelings well up with no mental content. Thoughts would be disconnected from emotion. Dissociation had once provided a protective shield for him, keeping fear and overwhelm at bay. Now, in present time, it dampened and dragged the full energies he needed to carry forward his goals with clarity and purpose.

• Another experience of trauma in real life is a sense of persistent fear that grabs our attention and doesnʼt seem to let go. Thereʼs no discernible reason why given what life is presenting us with the fear right now, but fear seems to permeate us nonetheless. It can seem like an unknown fear is running us.

An example Iʼm thinking of in this regard is a young man Iʼll call Zach. He was assaulted in the restaurant he managed. The assault had come out of the blue, not random as he later learned, but from his being mistaken for someone else. After his initial shock dissipated and his bruising healed, he was left with a pervasive fear and sense of vigilance that wouldnʼt go away. It seemed his body-mind system was locked in fear mode that would not let go. Zach couldnʼt sleep, lost his interest in motorcycling, in all the usual things that he loved doing (and the people he loved doing them with) and blamed himself for not being able to shake it, to just get over it. He badly wanted to move on, but his nervous system had gone into survival mode and hadnʼt been given the opportunity to unwind from that position. A nervous system under stress is designed for one thing: survival. That alone will consume vast amounts of energy until other resources become available to thaw what has been frozen.

• Trauma can create a pervasive sense of hopelessness or other negative feelings that can color the whole of an individualʼs view of life. An example of this can be taken from growing up in a family with the depression and unpredictability of alcoholism.

Annie, an intelligent woman in her early 40s described a family history with this kind of inconsistent foundation—everything strained and geared for just barely getting by. There were few stable boundaries between adults and children. Annie never knew where adult protection would come from; thus she lived with a lot of despair. She found it hard to trust herself, her decisions, her desires, and this eventually fed a chronic hopelessness. Growing up with this kind of unsupportive base is an energy drain, and the emotional poverty that Annie experienced as a child became her normal state of being. Annie was kept from feeling the space, freedom and potential to explore her world and her inner self, and to naturally trust herself. Hope was not available in this state.

Looking at our life experience through the lens of trauma offers a perspective where our unproductive actions or painful cyclical patterns make sense, instead of bewildering us or making us feel guilty. A trauma perspective suggests that our difficulties may stem from something that actually happened to us. This idea alone can be liberating. Any step back from shame or self- recrimination from our early life is a possible resource for healing. Knowing the impact that severe stress and trauma has in shaping the experience of our everyday lives offers us breathing room, information that can only expand our field of vision.

Posted in THE REAL YOU and tagged Peter Goetz, PTSD, Trauma
← One Key Question for Marketing Your PracticeRegulating Energy to Regulate Depression →