“The Oakland fire happened basically right in my backyard,” my friend and co-doctorate-student Helena told me as we were waiting for class to begin. “And while it was so horrible,” she dropped her voice to a whisper, “I haven’t really felt anything about it. Maybe I would if I knew the people who were inside. But the last couple months have been filled with horrible news every day. The election has taken my ability to care away.”

“Oh my god, me too, girl,” I sighed, relieved to know I wasn’t alone in my inability to give a shit about anything anymore. 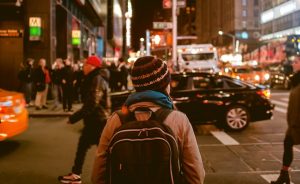 It’s a psychotherapist’s most shameful secret, the times when we realize we don’t care about suffering, and we can’t draw from the empathy we’re supposed to always have in supply. I haven’t gone numb with my clients, whose individual lives and stories I still feel deeply invested in, but anything beyond a one-on-one encounter has felt like reading a 6th-grade dystopian novel. It all sounds quite terrible, but surely the bell will ring and I’ll go home to get some celery and peanut butter and watch Animaniacs. Right?

This feeling of numbness and unreality has a name: Psychic Numbing. It was first coined by Dr. Robert Lifton, a psychiatrist who studied the psyches of survivors of Hiroshima and other mass atrocities. What he found was an adaptive response — when overwhelmed with loss, trauma, and sorrow, a human being will grow numb to his feelings. This allows him to continue to survive, and even to be able to talk about the event without feeling too connected to it.

It’s the nature of all defenses: When an experience is too horrible to make sense of, we employ all sorts of mental gymnastics to dampen it. We repress, deny, intellectualize, we make light of. If nothing else works, we numb. The New York Times recently wrote about the world’s numbness and inaction in regards to Aleppo. Even when we have videos of children begging for help, we don’t respond.

One of my co-doctorate-students at the Wright Institute, Leif Griffin, is studying psychic numbing in response to climate change for his dissertation. He is planning to interview older adults, people who have had enough life experience to have lived through past horrors, on how they are responding to our impending environmental disaster.

I gave Leif a call to ask him about his research. He explained, “When reality is threatening or information is overwhelming… there’s a human tendency to dampen or lessen our emotional response to the information.” For the victims of the Hiroshima bombing and other mass atrocities that Dr. Lifton studied, numbing “was an adaptive response to such horror and annihilation. It was a way to have an awareness that this happened, but with a sense of unreality.”

Climate change in particular, Leif said, is “this looming, threatening thing that we’re aware of, but can only pay attention to in bite-sized chunks.”

“I struggle with [numbing] all the time,” Leif acknowledged. “Like everyone else, I’ve got so much to do in my life, I can’t feel despair and hopelessness. [Numbing] is adaptive, but with the types of problems we have today, especially climate change, it’s ultimately not adaptive to us as a species to numb.”

I asked Leif what advice he would give to those of us—- perhaps that’s all of us at this point—who catch ourselves in our own psychic numbing when we read the news.

“I think the first thing is to not beat yourself up,” he said. “Just become aware that this is a response that we have. We [eventually] have to identify ways to move beyond it. But it’s a huge process.”

This is what I find myself saying to myself and therapy clients, too, that the first step of any change is becoming aware. We can’t have choice without awareness. I wish I knew an easier path to change, one that didn’t start with the excruciating process of waking up. If we are numb, it is because the alternative is terror. So we must start with noticing when we are numb, and knowing that terror lies sleeping underneath.

It’s so tempting to continue to numb, to not make space for the experience of horror, despair, and fear. We numb because we think that fear and despair are the end of the road, so it’s better not to make the turn into them.

With climate change, with Aleppo, with the Ghost Ship, with the reality of a violent, racist tyrant in the highest governmental position, we must awaken ourselves to our numbness, and give ourselves permission to make the brave choice to instead, feel.