P: 415-520-5567 | E: info@psychedinsanfrancisco.com
I’ve been thinking a lot lately about men. Not just the out-of-work, “forgotten”, rust belt men who voted for Donald Trump, but also about the smart, progressive 18-year-old son of a friend of mine, who confides in his mother that it’s hard to hear so much about how much white men have screwed everything up. I’m angry and anxious about what’s going on in this country for women, but I’m also concerned about men.

Trust me, I am a feminist, tried and true. I’ve spent the last 20 years turning over plenty of stones in my identity, searching for a voice I can call my own. I’ve been a lesbian for ten years, and married to a man for 10 more. 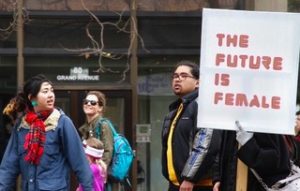 I was at the march last weekend with a group of beloved friends and reveled in the rich, ‘nasty’, diverse groundswell in Oakland. That grand public statement gummed up the BART stations and moved like rolling waves along the edge of Lake Merritt: a sea of billowing, rousing consciousness.

It was fantastic. But I still have this other question: what about the men?

What about the awake men who know that the patriarchy is bankrupt? Or the men trying to figure out what this means for them? The men who don’t really have a viable sense of themselves as a different kind of man, don’t have a new story to tell yet, but are looking?

Women of many stripes and colors have been crafting their own stories for over 30 years: rich narratives have burst forth from the voices, pages and paintbrushes of so many formerly silenced. Awake white men who care don’t have a story. And white men who don’t care have a story that doesn’t work for them any more, either. That’s why they voted for Trump.

So are these now men who have no narrative to be proud of, no role that allows them dignity, a sense of pride in their ability to protect and provide, to partner, to care, to be meaningfully embedded in community, to stand for a different set of priorities, to connect with one-another? Are these men, like my son’s friend, seeking a story that gives them a sense of being needed, valued, and critical to the future in a vastly different and new way?

My husband is reading a book now called The New Manhood by Steve Biddulph. It is a page turner on this topic, helping men open their eyes to just how miserable so many of them are in their limited roles. If they really stop and acknowledge it, their lives feel empty, devoid of inner reflection, isolated, mildly depressed, and anxious. Maybe even jealous that they don’t have a chance at telling a story because the one they were given, they can agree, is just suck-y.

Look at the lousy options most men have these days for ‘being men’. Their worth hinges on a pay-check. They often work at jobs that aren’t inspiring in a culture that tells them (white, privileged men, at least) that they should be able to realize their dreams. They bond through watching super-heroic athletes on TV. They have a sorely limited inner life, and are strangers to their hearts. The straight white men are supposed to live up to all the new found/newly expressed needs of the women in their lives—women who have spent years learning how to express these needs—while they are still relatively mute, having grown up being taught that the very act of acknowledging a need was “un-masculine.”

Where are these new men’s stories that parallel women’s and minority’s? Where are the stories that chronicle the broken promises of a patriarchal, capitalist, oh-so-limited set of options for feeling REAL? I wonder if these stories haven’t been written because so many men don’t even know how much they are suffering and certainly, in today’s climate, they don’t feel they can talk about it.

Ok, so before anyone accuses me of a pity party for the patriarchs, I want to clarify that this isn’t about pity. It’s about concern. For one, whether we, as women, run the risk of doing to decent men a version of what’s been done to us. I loved the speeches I heard in DC. But what was it like to hear them for progressive, democratic guys?

I’m also concerned because we really need these guys! What I wish those rousing speeches said to men at the end was: “Join us! We need you! We’re pissed, but we need you to care and help. We need you to proudly stand up and demonstrate a different manhood than what we see in the White House.” I wish those fiery, nasty, powerful, wise, strong women had issued a call forth to men to find the deeper meaning in their lives.

What will a new, post-patriarchal vision of manhood look like? What does partnership with women look like? Especially now, under a Trump presidency? What does it look like for men and women to find the common ways in which they are oppressed by the existing culture and join arms together? What does it look like to listen to a “nasty woman” and not give up on your masculinity but ask yourself how can I help her? What does it feel like for a man who knows how to step aside and let a strong woman in his life lead? There are many amazing men out there already doing this. Be proud. Let us know about it!

We need to give men a shot at doing something differently, invite them to step into their shoes and claim their own new story, in all its diverse flavors as well. Awake men need a story where they can take their personal kind of lead in the fight we are fighting.

This great trajectory of women finding our strength and our voices is a revolution still unfurling. I invite awake men to begin a revolution of their own—one that listens and includes us. One that they can proudly author. We women can’t write that story. But, with Donald Trump in the White House, and my two young sons at home, I really look forward to reading it.

Karin Swann-Rubenstein has M.A.s in Political Science, Communication and is a licensed CA MFT. For 20 years she has held to the importance of communicating psychological knowledge as a tool for social/political transformation. She is an active parent at her children’s Waldorf School in Berkeley and, for 7 years, has done design work and community organizing for non-profits. She sees her most important job, though, as raising herself to be the mother her twin boys need. She lives in Berkeley with her husband and seven year old sons.