When I was a young man working in Paris I was walking home late one summer evening after a sweet dinner with friends. The weather was warm. I walked in that proud way we walk sometimes when we’re dressed a bit more formally.

I wandered under the Eiffel Tower, crossed the Seine and headed up the hill of the Trocadero. Suddenly I felt a painful stinging in my back. I turned and saw three faces and whiffed alcohol. Young thugs were barreling down on me, fists clenched, arms pulled back, ready to punch, free hands gripping my jacket. I jerked my arms up to protect my face, yanked free and ran like hell.

Once I got to the subway I realized they’d managed to bloody me up quite a bit.

A few weeks later –once I had moved through the anger, the humiliation and the healing of my very visible facial wounds– I thought back and found fascinating that just before the first punch hit my face the punchers belted out “FAGGOT.”

I wondered what function had the labeling served?

Is it possible that the singling out of one part of me – a no doubt repulsive part of me for the bullies – and separating it from all of the other parts (my nice crisp suit and tie, my accent, my white male mid-20’s appearance) actually facilitated something?

To take it a step further, is it possible that by whittling me down to this one human behavior, it actually helped them whittle themselves down to another human part? Did the naming help them shed their hesitations, their internal parents’ expectations, their desire to be the nice guy their girlfriend wants them to be and simply be – for a moment– The Violent Bully?

What we do time and again in therapy is we help people bring these parts out through words — even the extreme parts so far away from Self they are barely audible. 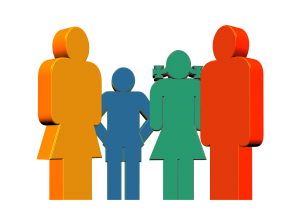 I work with a lot of couples in crisis. They’ve come to a moment in their couple when they feel they don’t know how to make it work on their own and they need a third party to help them out.

This often happens when they are no longer floating in the pink bubble of the honeymoon phase (frequently extended by pregnancy and parenthood). One partner will say “I don’t know who you are! Certainly NOT the person I married.” This phase is often fraught with fear because then each party starts scanning for other ‘negative things’ they might have missed. It can be a downward spiral from there. And these couples are not unlike the Parisian bullies – suddenly a part comes out that is unexpected and scary.

In these times, I like to borrow from a school of thought called Internal Family Systems – devised by Dr. Richard Schwarz. I am by no means an expert but I find it helpful.

On a whiteboard, I draw a little gobbledy-gook, cloud-like circle. “The IFS folks believe all of us have a Self with a capital S. It’s the part of us that’s spontaneous, open, flowing, connected. It’s the part that’s able to express emotions without hesitation, able to remain open to vulnerability, playfulness, etc.”

Nearly all parties nod when I present this idea.

“As we go through life we encounter trauma – difficult times that are real setbacks”. I draw big black arrows coming at the bumpy little Self Cloud. “Internal Family Systems people say we create parts – what they call Managers- to protect ourselves from the trauma. The Charmer Manager, the Compliant Manager, the Perfectionist Manager, the Belligerent Manager.” With each Manager, I draw other circles between the Self Cloud and the dark arrows – a protective shield like a squadron of warriors from a Star Wars film.

The next part can be fun. We do private detective work together to identify the types of Managers they’ve developed, how well each Manager has worked to protect them and how well they work today and the types of trauma they protect. Maybe people notice how some Managers have moved forward and others have taken a back seat.

Inevitably, we get to the realization that these Managers-–as helpful as they have been over the years–also get in the way of us doing things we might enjoy, living our lives fully. And that is often why people seek out help.

In this school of thought, there is another level of protection that kicks in when Managers aren’t enough. These are called Firefighters. I draw these as yet another level of shield only bigger, protecting the protector Managers. I put Firefighters closer to the trauma and farther from the original Self.

These are the Big Guns we pull out when our Managers have tried to protect us through all of the usual means and just don’t procure us the desired outcome – usually a yearning to feel safe, calm and soothed.

Because Firefighters aren’t pretty – and they may be socially unacceptable– they are often harder for someone to take ownership of. Fortunately, as therapists, we’re allowed to ask the uncomfortable kinds of questions most people would avoid at any dinner party.

The results can be powerful.

Firefighters are different from one person to another and what could be a Firefighter for one person might be a completely normal interaction for another. But for the person pulling out the Firefighter – it’s a big deal. It can be painfully overwhelming. It’s possible in some cases the person doesn’t even remember doing it.

Perhaps one of those bullies might have disclosed with embarrassment if he’d had the chance: “Sometimes I go out drinking with my buddies and beat up complete strangers.”

Firefighters, like Managers, have a protective role, but they can cause real harm to ourselves or to others.

In psychology, we generally work with the notion that ‘the greater the defense – the greater the trauma underneath.’ This explains why, for instance, women and men sent to Iraq can experience what used to be called “shell shock” and what we now call PTSD. Statistically, these people have suicide and domestic violence rates through the roof.

Some of these people can’t just use their basic Managers in moments of stress – instead, they turn to Firefighters proportionate to the kind of horrors they were exposed to. As we all know, this can become a national, headline-grabbing tragedy.

There is one final group of “people” in the Internal Family Systems world. These are called Exiles. The Exiles are the vulnerable, broken parts of ourselves that must absolutely remain hidden at all cost and need protection. They are the reason we must create Managers and Firefighters in the first place. “I’ll never amount to anything – I’ll always be lagging behind my sister,” “I have to do everything myself because people in authority roles just can’t be trusted,” or since studies show that people who express overt homophobia also react the most powerfully to homo-erotic images (Adams, 1996): “I can’t express my fondness for other men or I’ll be labelled a fag.”

Ever so gently in therapy we help people identify all the cast of characters involved in their lives: the Managers, Firefighters, Exiles. We also identify the Trauma that may have brought some of these characters into being.

Many times our “triggers,” which compel us to call on our Managers and Firefighters, are based in the fear that something from our past has come back to harm us. As Dr. Daniel Siegel from UCLA points out: our brains don’t really know the difference between what is real and what we imagine to be real. It just knows it needs to react fast in order to protect us. ‘Mommy’ isn’t really on the verge of leaving us (she is just working on a super demanding project that is taking up all her time) or we are not really being bombed (it’s just New Year’s fireworks going off).

For reasons that fascinate and escape me, this helps our clients somehow wriggle free of them.

When I think about the beauty of Internal Family Systems I am moved by its elegant capacity to remind me I’m made up of many parts –some perhaps far from my awareness and those parts are there to protect me from pain. This inner personal pantheon reminds me of a well-known story from my childhood. It’s a passage in the Christian Bible where Jesus performs an exorcism. This story really encapsulates how complex we humans really are and the way IFS helps us talk about our complexity. It’s a pretty theatrical story ending with hundreds of pigs throwing themselves into a lake to drown. But it starts very simply with Jesus simply attempting to name the demon.

Jesus asks the spirit doing the possessing: “What is your name?”
And the spirit replies: “My name is legion for we are many.”

Greg worked as a writer in Paris before transitioning into mental health in Bordeaux in the early 90's. Today he shares his time between San Francisco's Castro district and the beach town of Santa Cruz, California where he has practices. About psychotherapy he says: "I don't always know how the hell therapy works but I love being a sleuth, asking tons of questions to help people get to know their brains and to make sense of how they got to today. I particularly love those moments when a client suddenly hits on a deep truth; I just know something big is happening and I get a pit in my stomach. We get quiet and the room fills with a beautiful silence, a form of sweet intimacy."