It’s times like these that, as guilty as I feel saying it, I’m glad I have normal, nice hands.

I went to the Women’s March, looking for support for myself, just as much as to stand with women against Trump.

And at first, I felt the love in the crowd. I felt safer, empowered, and hope for everyone. But then there were signs with slurs like, “Troll Hands,” “Small Hands,” “Munchkin Hands,” and “Paws.” 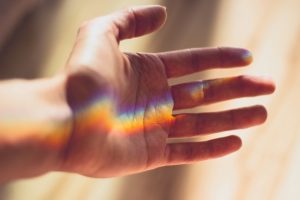 Suddenly I felt a pit in my stomach. Growing up, I had a friend who always kept one hand in his pocket. And on the rare chance I saw it, he’d conceal it. My friend’s hand looked and worked roughly like a closed fist.

He felt people could hardly breathe when he showed them his hand. Maybe he sensed their fear that they’d “catch” it if they got too close.

And although people rarely made fun of him to his face, behind his back, I would hear people call him, “Mutant Hands. Claws. Troll Hands. Paw Hands.” It was beyond calling him ugly. He was a freak. Not human.

But my big relief is not that I have nice hands. It’s that the media aren’t attacking Trump’s eyes. I am partially blind and already struggle to feel human without having my difference scrutinized by the media.

But then I think, what if people replaced mocking hands with blindness? I worry about my friend, how this fresh media joke equates different kinds of hands with sub-human worth.

As a person with a disability, when I hear “get your troll hands off of me,” it brings me back to dates when all signs pointed to yes, but I was hesitant to make a move, because it was hard for me to truly believe she could like me.

And if I was wrong, she’d recoil and scream, “Get your blind hands off me!” I’d feel like I’d violated her.

And then there’s Trump, who boasts of violating women. We run and seek protection from his bigotry. On Election Day, a protective layer I was unaware of ripped off. I was raw. I was more doubtful I’d have a job, family, be one of the success stories. That much more scared to break out of the mold of how men should look or act.

What if my friend went to the Women’s March, running from the bigotry, looking for support from a community that would see his humanity? Maybe he would have felt secure enough to raise his hand out in the open.

But after seeing the bullying troll hand signs, I wonder if he would have buried his own hand deeper in his pocket. At the March, the pit in my stomach wasn’t just his pain, but realizing I didn’t feel safe, not even here.

We’re always critiquing presidents for not matching our standard of beauty. But when the media slams Obama for being Black, Hillary for being masculine, Trump for having small hands, we are criticizing politicians as “physically defective:” this dehumanizes not only these politicians, but everyone who doesn’t fit into the “normal” mold.

Trump hurts us, and we rightly want to hurt him back. He may act like a monster. But it’s not his hands that are monstrous.

When we demean Trump for being physically different, we become the monsters we so fiercely fight.

Diego Kusnir is a licensed clinical psychologist, performance artist, and writer in San Francisco. He began performing spoken word in 2008 about his experiences being partially blind. He performs stories and comedy and provides trainings on disability across the country. He researches the use of art and personal narrative about disability to reduce stigma toward people with disabilities. He is completing a collection of autobiographical short stories about being partially blind and maintains a blog on the Huffington Post. He has a private psychotherapy practice in San Francisco, where he works with teens, adults, and couples, often working with issues of gender, race, disability, and marginalization. To learn more about any of his work, e-mail diegokusnirpsyd@gmail.com.