If you’ve read any of my previous writing, you will know I have a great reverence for the unconscious. It shows up again today, having accidentally chosen May 9, 2016, as my publication date – the day after Mother’s Day. This may seem on the surface to have all the depth of a Hallmark card, but as someone whose mother is dead, it is a painful and evocative marker of an experience I haven’t fully processed. 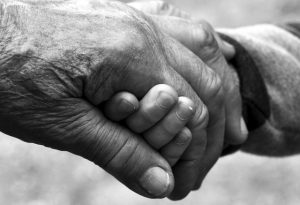 On Mother’s Day, there are reminders everywhere of idealized mother-child relationships: quarreling, having brunch, offering love and support. But for those of us with less-than-perfect relationships with dead mothers, the holiday is fraught and the reminders are painful. One person on my Facebook wrote, “I just wish I could fall asleep and wake up 2 days later.”

Part of my current grief process includes understanding what grief is to me, how I see it show up in my friends and patients, and making use of my grief and loss as a unique portal into connecting with others through this difficult and necessary conversation.

Elizabeth Kubler-Ross developed the “Stages of Grief” model for patients who are dying. Now, many health practitioners utilize this model to describe a baseline for understanding which emotions we might expect to show up in the bereaved. The emotions Kugler-Ross noted are Denial, Anger, Bargaining, Depression, and Acceptance. However, as a therapist who works with dying people, people whose loved ones have died, and who has experienced the death of someone close to me, I feel a need to expand on her observations. I have noticed that not everyone feels these emotions. Some people already felt these things before the death occurred. Additionally, I find that the experience of grief is more of a cycle than a stage.

In fact, I think grief actually resembles something closer to water cycles, the explanation for condensation and rainfall that is taught in elementary school science courses. Imagine your emotions are the sky. At certain times, usually for some time after a death occurs, our emotional sky is perpetually overcast. We can get lost in there. No time, connection, or relief exists in that dank, heavy, enveloping fog. At some other points, the clouds may feel billowy, or more like pockets. Maybe the occasional light and even a bird or two can come through. Sometimes the sky is completely dark. At other times, the sky rains, thunderstorms, maybe there is violent lightning, wind, or electrical current. And then sometimes it’s sunny all day long. (Sometimes there are even rainbows, which are so incredibly thrilling they can sometimes have the effect of making a person cry. Talk about a water cycle!)

As with the water cycle, there are other influences on how a person will grieve, such as what is happening on the ground, on a fundamental level. When someone’s mother dies, for example, their grief process will have a lot to do with the foundation of their relationship with their mother while she was alive. For some people, the grief process will feel cathartic, and for others, it will feel like being stuck in the whirlwind of a tornado.

How we process our losses also has to do with what else is going on currently in our lives. Like the water cycle, grief “condensation” and “waves” can get built up due to stress, illness, lack of self-care, and major life changes. Birth/death dates, anniversaries, holidays, even smells, tastes, and images can evoke a wave on the ground that can lead to storms in the sky above.

Because we all grieve so differently, and the death of one’s mother is something so complex, it feels like a necessary conversation to have. Many people I spoke with call the experience “having joined the Dead Mothers Club” (there is both a movie and a Facebook group of the same name). As I asked about what shape people’s experience of mourning and loss has taken throughout their lives, I noticed themes including guilt, anger, taboo, sadness, catharsis, strength, and connection.

“I don’t know if I really grieved the “right” way,” Joy told me about processing her mother’s death. “I was in shock for about the first five or ten years. For Mother’s Day, my sisters and I would plant her favorite flower, and talk about her. And then I became a mother- and so much about Mother’s day is now life-affirming and fun, rather than mourning.”

“We were sitting vigil with my mother for those last days. I’m glad the hospice nurse told us what the death rattle would sound like,” Renee said. “Otherwise, I would have been terrified in that moment when she actually died.”

“My mother wouldn’t let me be at her side while she was dying, and I still hold resentment and regret that I didn’t get to say goodbye to her in my own way,” Ann explained. “I went on to spend the next many years in a drug-induced haze, and only in my 30s did I really start to process what I was still carrying from that time.”

None of this is good or bad, most of it just is. No grief process looks the same. Just know, that whatever you are going through, you are not alone. There are people who have felt what you feel, in their own way and in their own time, just as you are grieving in your own way and in your own time. You can’t speed it up, but you can survive it. Life after death is really a thing.

In upcoming articles, Molly will share detailed stories from people whose mothers have died to help us continue the conversation about grief and loss.

Posted in THE SH&T HAS HIT THE FAN and tagged death, grief, Mother's Day, Motherless Daughters
← What about Bedside Manner? Empathy in Medical CareGrowing Up (Together)’s a Bitch →