A couple sat in my office recently, struggling with an issue that was beginning to feel familiar. They were both missing the olden days where they felt more in love and excited about each other, before kids came along and changed everything. Having to learn how to relate to each other anew had been driving these two apart for months, their frustration causing superficial behaviors – like emotional cut-offs and criticism – that were only driving a greater wedge between them. 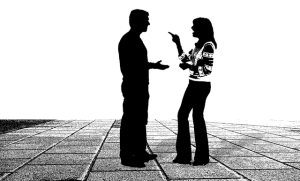 I realize I have heard this before – “You’re such a bitch now! You used to be so much cooler.” “Ever since we had kids, all you do is work.” – both in and out of the therapy room: partners confiding that they miss the women and men their partners used to be… before kids. To be clear, this is not a phenomenon limited to straight, gender normative couples. I’ve seen this dynamic in all kinds of couples once the baby’s toddling around out of the womb and everybody’s new roles have had a chance to gel. While there is no hard and fast rule, what I have seen is that both partners tend to change under the new stresses and emotional load parenting brings, and that it is often along gender lines that the complaints fall. Often a breadwinner is accused of becoming a workaholic, often the primary caregiver is accused of negativity. Both are accused of having changed for the worse. Suddenly, one partner’s perceived personality change is responsible for all the negative relationship patterns between the two: “I’m tired of feeling disappointed that you refuse to do any family stuff with us, and I’m also tired of being accused of nagging!” Sound familiar? How about this one? “I wish I could do more family stuff but I have to work around the clock in order to have the things we have. Can’t I ever be allowed to tune out?!”

It takes two to tango

There’s some important stuff to know when this issue comes up between you and your partner. First and foremost, there are two of you in the relationship so probably, two of you are contributing to the problem even though it may seem like it’s just one person’s fault. There’s a term in family therapy, identified patient, that applies here. Though everyone is feeling it and dealing with it on some level, the IP is often the one who shows the signs of stress more outwardly (think rages, excessive worry, indecision, substance abuse) than the other. The couple will “identify” this person by saying either directly or indirectly, “you’re the bad one,” when what’s going on is more complicated, and actually everyone is feeling “bad” though not always consciously. Often couples enter counseling at this point, with one person frustrated by the other’s behavior. So think about what in the mix might be yours:  Are you crankier too, now that you haven’t slept an uninterrupted 8 hours for the past couple years? Do you take your partner’s moodiness personally, feeling hurt when you really don’t know why she’s acting this way? Do you take responsibility for your own moods? Are you able to truly hear the important communication your partner shares with you? Is it always one of you who sets the emotional barometer of your relationship, and if so, how come?

There are some major forces at play when couples suffer this kind of divide – and none of it means a doomed relationship. Most often what’s actually happening is normal relationship development, which can be a painful process and one which you’ve probably been aware of at certain points in your relationship before now. Growing pains. When you first fell in love your differences were intriguing and sexy. As you settled into being a couple, you found so much common ground, you were a great team who spoke your own special language and had tons of inside jokes. At different points along the way you have felt distance between you, which you’ve overcome and have come to both honor each other’s independence and cherish your bond. You’ve been through growing pains before, and this is another one. But it can leave you wondering, If you love each other so much, why is it so hard? What happened to the person you married?

In their book, In Quest of the Mythical Mate,  Ellyn Bader Ph.D. and Peter Pearson Ph. D. explain how couples relationships move through predictable stages. Their model, based on Margaret Mahler’s childhood development model and attachment theory, outlines basic stages that couples cycle through, and often repeat at different points in life:

Meeting the challenges of pregnancy, birth and parenting can cause big personal growth. It is common for one partner to split off to a different stage around this time, when the couple had previously shared the same one. Finding yourself looking at your mate and thinking, “where the heck did you go?” is often the hallmark of stage-splitting. And it can feel particularly insurmountable after you’ve had a child because you were likely feeling very solid together beforehand – enjoying intimacy, independence and feeling like your relationship could survive its conflicts. Now you suddenly find your relationship so changed (not just your partner, remember, it takes two to tango) when the stakes are so high (children can’t raise themselves!), you need each other so much and you can’t agree on the simplest of things anymore. It can feel frightening. In many cases, a partner’s individual growth can feel hurtful, leaving the other one feeling abandoned or angry – “Ever since the baby was born it’s been the two of them and I’m on the outside.” “You’re so serious all the time, you’re never happy to see me.”

Another place where couples with young kids run into this dilemma is when they hadn’t yet achieved enough differentiation prior to starting a family, and then didn’t get a chance to return to it before the birth of a second child. Between the energy it takes to parent and the energy it takes to grow individually, there is very little left to give a still-differentiating relationship, unless you are attentive to it. When this happens partners can feel very isolated from one another and go through long stretches of emotional withdrawal, like you’re only together because you have children. It can feel lifeless, loveless. “We don’t even know each other anymore.”  Understanding that your couple’s development has been put on pause by the growth of your family can offer some hope. It may feel like the relationship is over, but maybe it just needs some loving attention like you’ve gotten so good at giving the kids. The majority of my couples clients begin working with me right here and with some effort their relationships get stronger.

Having children will definitely influence a couple’s relationship development. Often it will cause a flurry of personal development that, combined with the demands of caring for small kids, leaves little energy for relationship growth. Yeah yeah yeah, you think. I know, we need to try harder to do date nights. But yes, you do, because taking the time to nourish your partnership will alleviate some of the stress that keeps you feeling separate, and that causes destructive patterns. Spending adults-only time will allow you the space to unpack some of these perceptions about each other’s changes and even better, to be curious about the changes you’re both experiencing. Attending to your relationship’s growth can feel like falling in love again, with challenges. And that actually facilitates differentiation, a necessary stage in developing true lasting synergy.

Posted in RELATING, THE REAL YOU
← The Mourning After, Part I: Grief after Mother’s DayIntuitive Eating: A Political Act of Radical Self-Love →