As my good friend Rachel observed, many of us seem to be emotionally sunburnt with the landmine of triggers surrounding the 2016 Presidential Election bombarding us on a daily basis. I, for one, admit that I am more than sunburnt… I am crispy. Normally I would take a few days to make sure that I am responding from a place of love instead of reactivity before I endeavor on a post of this nature. It is National Coming Out Day so today seems as good a time as any. I am pissed and, quite frankly, emotionally charged by a meme that I saw floating around social media yesterday declaring: “Straight Allies Are Not a Part of the LGBTQ Community.” 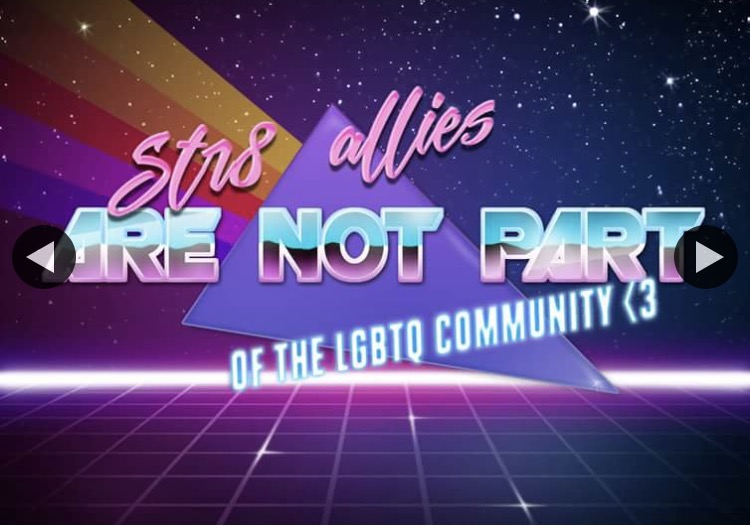 What I share in this blog is concern, born out of my lived experience, on why such a message promotes some of the very same hatred that many of us are trying to challenge in society at large. There are numerous permutations of the LGBT+ abbreviation. Opinion is clearly split, depending on who you ask, about whether the “A” in one version of the abbreviation, LGBTQQIA, stands for asexual or allies. A variety of other sources use an even longer abbreviation LGBTQQIAA to recognize both asexual individuals and allies. Even with this longer abbreviation, concerns are still raised that pansexual, polyamorous, and individuals who identify in a variety of ways that have made them feel excluded, different, or misunderstood are not officially included in our letter soup. Yet this conversation around inclusion in an abbreviation has greater implications than simple semantics.

What do we define as inclusion and what does it mean when we say that allies are not part of our community?

Because any organization connected to LGBT+ rights I’ve ever been involved with included “ally” or “allies” in their marketing so this meme surprised me. I consulted several members of my own support group, composed of multiple identifiers, to check my thinking. What I took from those conversations is that it is first important to share my own experiences that inform my reaction to this meme and this line of thinking. I am a bisexual woman whose coming out was a very graduated process.  I knew at the age of 11 that I was romantically attracted to both males and females (at that time my thinking around gender was largely binary, informed by my upbringing). The first time I even considered coming out about my attractions and knowing without a doubt that everything I’d studied about bisexuality was me was at the age of 19. Having just left a conservative home (mixed Catholic and Evangelical) and still relying on my home base for financial support, to come out in any capacity equaled death. As my second year of college progressed, I eventually felt safe enough to come out as an ally—and I took a good deal of shit for that in various circles of my life. Although I knew, deep down, that I really wasn’t “straight,” it seemed safest at the time to let my family and others around me keep thinking that I was.

Am I proud of hiding so much of myself for so long? Of course not. Do I still experience some shame when I hear about kids who were willing to lose it all in order to come out? Yes. But this was part of my story. I hear tolerance and compassion from many people I admire in LGBTQQIAA circles that the coming out process ought never be forced. For me, coming out as an ally was a necessary first step in my process. After leaving an Evangelical church I ended up in Catholicism for a few years, desperately seeking some spiritual solution, and remained an ally even as I explored those circles.

While working at a major pilgrimage site and mission organization in Eastern Europe, I regularly spoke up when priests and other members of the church who were talking smack about queer people. I knew I couldn’t change their minds but I would ask if they’d ever actually talked to a gay or queer person, or if they were forming their opinions based on church rhetoric and commentary. I asked the same types of questions during my graduate education at a very conservative Catholic institution, often being shut down and ostracized. Even if I had only been a straight person (and not a closeted bisexual), the experience taught me just how much scary it is for any ally, regardless of how they identify, to speak up in hostile situations. Any ally willing to do this in any capacity, especially if they come from a conservative or religious background, is taking a risk and even if no one else is grateful for them, I am. 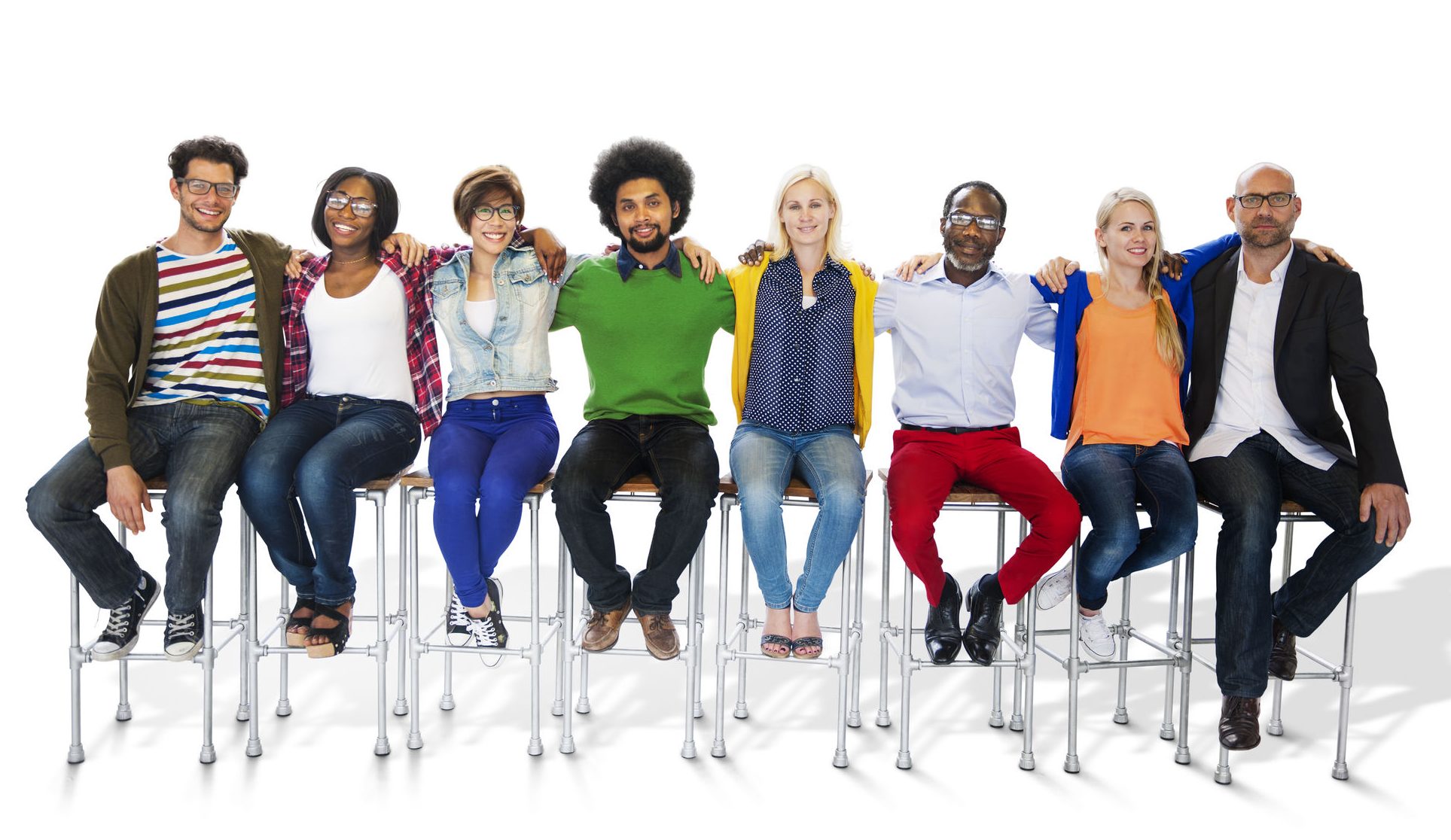 As an unspecified ally throughout my young adult years, I had the golden opportunity to be embraced by many individuals of diverse sexual and gender orientations. I felt embraced. It felt like their welcome was the anecdote to what I experienced in the church circles with which I found myself involved the first quarter of my life. Eventually, I felt strong enough to start coming out as bi to close friends and romantic partners. Then I started coming out to professionals in my circles I identified as safe. From there I built the strength to come out to my family and close conservative friends and eventually I freed myself to not be embarrassed, in any circle, to declare who and what I am. If I had seen this meme or encountered this kind of exclusionary thinking during my long journey of discovery, I would have felt just as shut down as did all of those years sitting in church circles. I would have been met with a sense of, “I guess I’m not safe here too,” or I would have been forced to come out before I was ready just to fit in.

In reading comments and hearing others’ experiences about how annoying allies can be, I want to assure you that I do acknowledge your perspective. There are allies out there who will talk a good game about being an “ally” because it’s cool or the right thing to do as a liberal thinker and will not actually lift a finger to change things for the LGBTQQIAA community. I also acknowledge that some of us only feel safe and secure around people who identify just like us; having too many allies around, especially those who are allies in name only, may threaten our perception of safety. Speaking purely for myself and no one else, I will never feel safe in any community where there is any policy of exclusion, either implicit or explicit. Messages like “you don’t belong here,” “you’re not one of us,” or “you’re not part of the family, the tribe, etc.” can be very damaging and I had my fill of them years ago in conservative circles. As individuals who do not identify as straight, we must do better than this.

It’s funny—as I read through my experience, I can already hear the comments being thrown at me about my passing privilege or my cisgender privilege. I acknowledge those fully and still believe that all of us, regardless of our letter in the letter soup of identifiers, hold a piece of the truth. We all have something to share and to contribute. And this includes straight allies. Perhaps for me, as I breathe and attempt to integrate my visceral reaction from yesterday, the solution is to not see the LGBTQQIAA umbrella as one community. A binary construct that I either fit into or don’t.  Rather, the challenge for us may be to find the pockets of safety, the smaller communities within the larger community, where we do experience safety, belonging, and a place to be our authentic selves. I have found mine—and it’s my sincerest wish to anyone reading this that you find yours as well.

Posted in CULTURE and tagged Allies, Bi Sexual, coming out, Inclusion, LGBTQ
← The Dark Side of Motherhood: It Does Get BetterHow To Talk To Other Parents About Conflict Between Children →