By now, the letters “PTSD” have attained a well-known place in American culture. Most people know of PTSD from the media or from colleagues or therapists. PTSD stands for Post Traumatic Stress Disorder, it’s the working name for a wide set of symptoms, responses, behaviors and conditions that people exhibit, arising from the experience trauma.

PTSD has been around a long time but the term was coined in 1980 when the APA DSM, 3rd edition* first listed it as a diagnosis. Before that, during World War I, it was known as shell-shock or later, battle fatigue in World War II.  These terms named the intense and debilitating reactions seen in soldiers returning from war. Later during the Vietnam War, as veterans returned with painfully evident psychological scars, people began to see connections with the work of early womenʼs movement activists for survivors of domestic violence and sexual abuse. These two groups of traumatized people (meaning those who had witnessed or been participants in prolonged, continuing and intense interpersonal violence) showed impairments and symptom profiles that were strikingly similar. Hence, the creation of the condition now called PTSD. 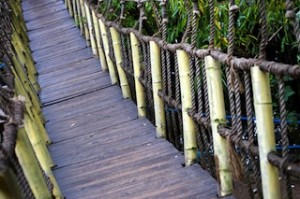 But how does PTSD work in real life? Letʼs look at some of the felt experiences that can arise from PTSD and its impact on people in their daily lives.

• Trauma, defined as a deeply distressing or disturbing experience, overwhelms our adaptive capacities to cope with what weʼre being confronted with in our lives. It strips away many of our normal inner resources and leaves a deficit. Symptoms may include fear, confusion, despair, overwhelm and anxiety. These are biological as well as psychological stress responses.

• A loss of a sense of security or safety is always a factor in trauma response and PTSD. Individuals whoʼve experienced trauma have had their normal protective boundary broached. Theyʼre left feeling unsafe in the world, and sometimes in their own bodies. For many, there is a decreased attachment to life and feelings of episodic or ongoing despair or even suicidal thoughts.

•Trauma is a full body experience and as such, PTSD affects all body systems. When a threat or a perceived threat is encountered, a cascade of biochemical, hormonal and physiological events unfold. If the threat is ongoing, these linked systems are ʻset offʼ and fire at lower levels of threat. When this state is tripped again and again and becomes chronic, our bodies are bathed in hormones (cortisol and adrenaline being 2 well known examples) that function best as stress responses, not frequently repeating ones. Over time, our bodies bear the burden** of this with known health problems. Numerous chronic health problems have been linked with unresolved trauma and PTSD and include endocrine problems, hypertension, obesity, cardiovascular disease and, perhaps most notably, chronic pain.

• Trauma and PTSD disrupts our ability to balance our internal emotional states and the physical responses accompanying them. Thereʼs a tendency to move a into hyper-aroused state (marked by agitation, anxiety, strong and sudden reactions to stimuli, a sense of nerves being frayed) or hypo-arousal (marked by numbing, a sense of deadening, decreased responsiveness to the world, depression, dissociation) or sometimes, rapid shifts between both extremes.

• Trauma is very complex and so is PTSD. Every part of the body-mind-spirit system is impacted and involved. Research shows that trauma changes brain circuitry and structure. Trauma colors how we see ourselves, others, life as a whole and our potential to be active agents in our lives and in the world.

[Part 2 of PTSD: A Primer will appear in Psyched Magazine in the near future.]

** thanks to Bessel van der Kolk for the coining of the phrase ʼbody bears the burden.ʼ

Posted in THE REAL YOU and tagged Anger Triggers, Anxiety, PTSD
← The River of Grief: Pain That TeachesWhen Sharing is Scaring: How to Deal with Your Partner’s Sexual Past →