In my first piece about getting comfortable with discomfort, I talked about painful triggers that White folks can have when confronted with systemic racism and White supremacy. Guess what- there are so many more ways we can be triggered, especially in our romantic relationships! I can hear your excitement now. Um- yay, relationship triggers?

Well, actually- yes. Yay, relationship triggers! Not because they feel good (they don’t), but because they can teach us something about how to become more thoughtful people, and better companions to our sweethearts as well as to ourselves. 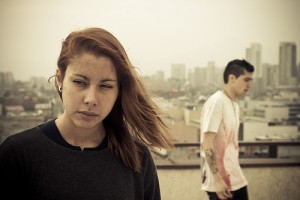 Imagine this scenario: A couple is driving back home from a day of hiking. It’s getting dark, and they’re on a windy road. They are still having fun from their day together, bantering back and forth, offering up stories and inside jokes only the two of them understand. At one point, the driver- we’ll call her Jo- gets startled by the headlights of two cars seemingly coming towards her in the darkness. She becomes confused, scared, and has to suddenly pull away from the conversation and into quick-decision mode. Her reptilian brain, a much faster thinker than her prefrontal cortex, takes over.

Just then, her partner- we’ll call him Bo- who is still in playful banter mode, shouts, “Stop! In the name of love!”

Jo’s quick reptilian brain hears “Stop,” but not the rest of his sentence. But Bo’s command- or what she thinks is his command- comes too late. She’d already decided to keep driving in the direction she’d been going. But she hears “stop,” and she get scared. What does Bo mean? Should she have stopped? Will they be killed?

In an instant, she becomes terrified.

A few moments later, her slow prefrontal cortex registers the rest of his sentence: “In the name of love…” She thinks: He did not mean to tell me to stop the car. In fact, he wasn’t even privy to her thought process. But she is still scared, afraid she did something fatally wrong. Still activated in her reptilian brain, she shouts at him: “Don’t say Stop when I’m driving! Don’t say that!”

Bo is bewildered. He has no idea what he did wrong. They were playing, then suddenly, BAM, he’s being yelled at. He is surprised, which leads to getting defensive. He tries to figure out whether he did do something wrong.

“You’re yelling at me; I don’t even know why. I’m not taking the blame for this. It’s not my fault! I didn’t do anything wrong,” pleads Bo.

This makes Jo even more upset. She knows, in some part of her, that there is no blame to be had for any of it. But she still feels shaken and needs him to comfort her. She doesn’t quite know how to ask for it. She’s still driving the car in the dark on a winding road, after all.

“It’s not about blame,” she says. “I just got scared, I get scared when I drive at night, I can’t see well, and there were two cars coming!”

“Okay, well I didn’t know that about you driving at night, and I didn’t see those cars. But you don’t need to shout at me- I didn’t do anything wrong, we were just playing around,” Bo says.

Maybe it’s something about his tone, or something about the chemicals in her body that are prolonging her fear, or some combination of the two- but this misses the mark for Jo. It’s not helping her calm down. So now, in addition to being shaken, she feels isolated from Bo, and doesn’t feel heard or comforted by him at all.

She turns up the radio and tunes him out, and they drive in silence the rest of the way home.

The truth is, we all have these kinds of interactions in our relationships. Jo and Bo learned things about each other during this fight- Bo learned that Jo gets scared while driving at night, and Jo learned that Bo gets defensive when triggered by her anger. Arguments can feel awful, but when you’re triggered with someone you trust, these moments can help you deepen your understanding of each other if you can listen to yourself and have an open conversation with the other person.

Here are some common ways that people respond to being triggered:

Fight: Move towards the thing that triggered you to overpower the apparent threat. For example, you might snap at your sweetheart like Jo did (“Don’t say Stop when I’m driving!”). This, or, if either person had said, “You do this to me all the time!”, would be a fight response.

Flight: Run away from the thing that triggered you (i.e., GTFO). When Jo turns up the radio, she edges out any possibility of further conversation with Bo and “flees” the conversation. When Bo says, “It’s not my fault,” he wants to get away from Jo’s anger. Or, if they were more escalated: “I won’t have this conversation with you,” followed by getting out of the car.

Freeze: Stop in your tracks. Feel your mind separate from your body, no longer connected to the scene and situation. Prey animals will play dead when a predator pounces on them, like a mouse going limp in a cat’s mouth. The animal’s body is shutting down, preserving what energy is left, so that if the predator loses interest, the prey has enough juice left to get up and run away. In our couple’s conflict, the “flight” response from Jo is also a freeze response: Turn up the radio, pretending it didn’t happen, totally disconnecting from Bo.

Appease: Make the other person feel better, take the blame for something even if it’s not yours to take. Some people prefer to avoid arguments and are skilled at conflict avoidance because disagreements feel dangerous to them. When Jo explains, “I just got scared,” she is appealing to the kindness in Bo and hoping she can de-escalate the conflict by appeasing him in the moment.

As you can see, these responses can show up throughout an argument, and while we might have one that’s our standard go-to, we can learn and utilize others. What’s important isn’t that we eliminate our triggers, but that we know what they are, and how we tend to respond. We then can learn how to pause and think between the trigger and that response, and recover after a button-pushing argument.

If I were their couples therapist, I would help Jo and Bo find a time when they’re not preoccupied to talk about what feels triggering, and what they each need during those times. I would encourage them to practice offering these things to each other in session as well as other times they are not in an argument, so that when they find themselves in a conflict, it will be easier to reach for the skills they’ve practiced. This process takes time, and will bring them closer together as they practice loving and understanding each other the way they each need to be loved and understood.

See? Yay, relationship triggers! If we use them well, they really do offer an opportunity for deeper love and connection.

Posted in THE REAL YOU and tagged conflict, fighting, relationship, relationship triggers, triggers
← Look at Me! Look at Me! (Spotlights and Shadows)Do Good or Make Money: Which Side are YOU on? →