Self-compassion is at the heart of my personal and professional life, and when people ask me how it got there, I usually say that it was through my meditation practice. It’s true that sitting for years on a consistent basis (when I’m tired, anxious, joyful, frustrated and everything else) showed me a lot about the power of choosing to be present with my experience, rather than judging myself for having it. But I first became aware of the revolutionary nature of self-compassion years before I started meditating. 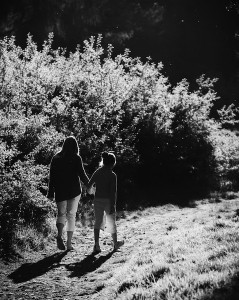 On September 29, 1995, a ringing phone woke me around 5am. It was my aunt. “Come home now, honey,” she said. “We’re with Grandma in the hospital.” My grandmother had been battling lung cancer for four years, and I was dreading this call. I hung up and left a voicemail at the publishing company where I was an editorial assistant, letting my manager know I wouldn’t be in that day.

I was two years out of college, living in New York City. The first train to Connecticut, where I grew up, didn’t leave until 6:20am. I got dressed, put some clothes in a backpack, and got on the subway. When I arrived at Grand Central Station, it was mostly empty. The ticket windows were still closed.

I noticed a row of ATMs nearby, their lights blinking in unison. They reminded me of the slot machines in Las Vegas. Earlier that year, after her doctors said that it didn’t make sense to do any more chemo or radiation, my grandmother announced that she wanted to go to Vegas. So, my mother and I went with my grandparents for a four-day weekend in July. We visited the Hoover Dam, drove all the way to Bryce Canyon, and on the way back we parked by the side of the road for 10 minutes to watch shooting stars in the clear Utah sky. I sat with my grandmother as she played the slots at the Golden Nugget, and I felt uneasy (yet also willing) walking her out to the casino lobby so she could stretch her legs and then have a cigarette without being seen and scolded by my mother and grandfather. On the flight home, we all somehow got bumped up to First Class.

I looked up as the bright lights of the Departures board switched on and rows of station stops and track numbers clicked into place. One ticket window opened and I walked toward it. Everything had an eery simplicity. I was alone, with no big conversations to be had for the next hour and a half. I only had one responsibility: get on the first train. I paid for a one-way ticket and walked to my track. Just before I boarded the train, I saw a maintenance worker dozing under a sign that read, “Stay Alert!” Down as I was, I smiled, feeling like those instructions were somehow for me.

Sometimes life changes in an instant, and you don’t have time to think about what’s happening until it’s over. Other times, you get these little windows where you’re in between two of your own lives. There’s the life that came before, and the life that comes after. As the train lurched out of the station, I knew I was in a little window.

Many people grow up living far away from their grandparents, not ever knowing them, or having very distant relationships with them. That wasn’t my experience. My mother was a single parent, and we lived with my grandparents for several years when I was a child.  Most weekends, I stayed with them. Their home was home.

Throughout my teens and early 20s, I struggled with anxiety and depression, and my mother and I had a strained relationship. I felt profound anger and resentment toward her for some of the decisions she had made early in my life. And when I wasn’t blaming her for my unhappiness, I was blaming myself.

I was an English major, working in publishing in New York, and I believed I should be happy. Except I wasn’t. The work felt empty. I didn’t believe that I was participating in life in a meaningful way, and I desperately wanted to. But I had no clue about how to do that, and I was sure that my inability to figure it out proved that there was something really wrong with me.

While my mother and I couldn’t spend any amount of time together, or even speak on the phone for very long, without unraveling into bitter arguments, I could talk to my grandmother. We didn’t need a lot of words. She understood me and believed in me in ways that no one else seemed to. She saw things in me that I didn’t even know about yet. What would the world be like without her in it? I could not imagine.

When the train pulled into the station, my cousin was there to pick me up. I was grateful to see him, but we didn’t talk much. He told me that my grandmother had been up all night with what she thought was a bad cold. But then early in the morning she had told my grandfather to take her to the hospital. Once she was there, her condition rapidly deteriorated.

My grandmother was no longer conscious by the time we got to her room. I hugged my mother, my grandfather, my uncle, my aunt, and my other cousins. I went to my grandmother and held her hand. I could not wrap my mind around what was happening. I knew that, right then, we were all still on the same side of a line, as we had been my whole life. But she was about to leave us and cross over to the other side of that line. What did that even mean? Where was she going? Death was about to go from being an abstract concept, to being a very real experience. My mother put her hand on my shoulder, and we went into a room nearby with some chairs and a couch. I was crying. She sat next to me and rested her hand on my arm.

For the first time, it occurred to me that I had learned to attune to other people to figure out what the “right” feeling was in a given situation. I hadn’t even realized that I’d been doing that. But it suddenly became clear: I didn’t know what it was like to simply feel my own feelings because I was usually so busy feeling everyone else’s. That was a big part of why I felt so disoriented and bewildered. It wasn’t just that I was facing the death of someone I loved for the first time. It was also the fact that my own feelings were so intense that they couldn’t be overridden. I couldn’t locate myself by attuning to the people around me, and I felt terrified about this loss of control.

My mother looked at me with concern. “However you feel is OK,” she said.

I stared at her, stunned. However I feel is OK? This was news to me. No one had ever mentioned the possibility of that sort of emotional free-for-all. Those five words showed me a door that I hadn’t even realized was there. It was the start of a quiet revolution. A few moments later, my cousin came in to tell us that my grandmother had stopped breathing.

In the days, weeks, months and years that followed, I learned about how grief unfolds. I also learned how to attune to myself, because I walked through the door that my mother’s words revealed to me. And she seemed to walk through that door, too. Through a series of incremental changes, over nearly 19 years, we both learned to relate to ourselves, and to each other, with genuine compassion. Today, we have a very close relationship.

I recently asked my mother about that moment just before my grandmother died, and she said that she doesn’t know where those five words came from exactly. “I didn’t think them,” she said. “They just came out.” She feels like my grandmother gave them to her to pass along to me.

So, now I’m passing those five revolutionary, unthought words along to you. If you’re struggling with self-judgment, or with not even knowing how you feel, or if you have a strained relationship with someone close to you, or if you’re facing something that’s so big you don’t know how you’ll live through it, may these five words remind you that you’re not alone. The door of self-compassion is always available, and you can find it right where you are.

However you feel is ok.

Lea is a San Francisco–based therapist, writer and group facilitator who believes in the power of self-compassion to change the world, one person at a time. Through her writing, private practice, groups and workshops, she helps people live with greater clarity, joy and meaning by guiding them to meet self-limiting beliefs with loving presence, and wake up from the trance of self-judgment. She draws on her clinical practice, ongoing professional training, decade-plus Zen meditation practice, and nearly 20 years of experience in awakening and cultivating self-compassion. You can download her free self-compassion guide: "Love Yourself Now ~ 10 ways to break the trance of self-judgment" by visiting her website.

Posted in THE REAL YOU and tagged Authenticity, compassion, Emotional Health, Feelings, Mindfulness, Self Care, self compassion, Self-Inquiry, Vulnerability, Well-Being
← The check-in: an exercise to nurture intimacy and the tolerance of deep connectionRunning with it: exercise and the inner critic →