I was thinking about going for a quick jog the other night when my inner critic burst in. She wanted to remind me that I shouldn’t even bother if it’s going to be so short and probably slow (“is that even running?”). She said, “You’re always going to be fat and lazy. You’ll never look like those really fit people.” Ugh. The little bit of energy I had was zapped. Walking up the stairs into my apartment became painful. Obviously, she was telling the truth about me. 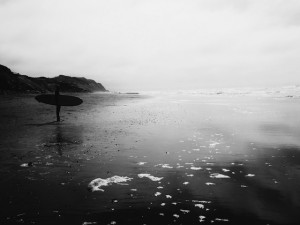 My partner, who knew this was happening, encouraged me to try it anyway. He reminded me that I usually feel better once I get moving. He offered to join me on his bike and torment me. Sounds like a terrible idea, right? That’s what I said. But I remembered that it actually helps if I face my critic by externalizing her. I took him up on his offer and I can’t even begin to tell you how annoying he was.

I kept having to swat him away as he’d sneak up behind me to pull at my shirt. I told him to f*#k off multiple times but he kept coming back around for more. He’d circle around me with this obnoxious grin on his face. At one point he totally ignored my directions on where to go and just took off the other way. I spent the next few minutes fuming until I realized I didn’t give a s#it if he got lost or confused–this was my run.

Amazingly this worked. Accessing my anger brought out a sort of mama-bear self-protective mechanism that made me even more determined to do this run on my terms. I listened to my body and made adjustments when my knee ached, I kept a steady pace that fit where I was at, and I ran for 30 minutes without hurting myself–emotionally or physically.

When we’re used to hating on ourselves, the critic becomes so wrapped up in our identity that it can be hard to spot. Seeing aspects of the critic outside of ourselves, as played by my partner in my case, can help us realize how out of line it is. Every time I run she’s doing all that same tantalizing stuff my partner was doing only it’s happening internally. Instead of energizing me, she drags me down because I buy into it. The story she’s whispering in my ear becomes the truth and I start to feel like it–fat, slow, weak, worthless. Yes, why would I run if all those things are true and will always be true?

Getting trapped in these stories can play a major factor in why it’s so difficult for many of us to stay active. Just thinking about taking care of ourselves can bring out the critic. The critic wants it to be perfect—which, according to some definitions, is that skinny lady who goes to the gym every day at 5am even when she’s sick. It’s not good enough for the critic that we might get our exercise doing an activity that’s fun and gets us moving. The critic is all about what’s deficient—not seeing and feeling what’s working. I bet it was someone’s critic who decided to call it an “exercise routine”. What if my body wants something different today? What if my inner child wants to splash around in puddles for exercise instead of doing the routine? Have you ever asked yourself what sounds like a FUN and nourishing way to break a sweat today?

I don’t want you to get the idea that I think it’s possible for us to live in lollipop and butterfly land where we get to follow our hearts and just do what sounds fun. I get that we also need to work hard and persevere through difficulty for greater gains. But when our critics take over, the suffering becomes disproportionate. Instead of motivating me, my critic wears me out and stops me from taking care of myself or trying new things. It doesn’t matter what we do, our critics can show up anywhere anytime. The trick is getting more familiar with it by first realizing when it’s there (changes in your energy, in your physical body, inner monologue) and then learning how to run with it. On my run, that meant accessing some intense mother-bear love for myself to keep the attacker at bay. It meant practicing mindfulness with every breath and maintaining my focus. On another day, it might mean saying, “You’re fighting a cold so you need to stay in bed and rest. Feeling weak today doesn’t make you a weak person.”

As a “fun” (interesting, scary, mind-blowing) experiment, ask a trusted friend to help you try this out:

1. Write down some of the messages your critic is telling you about exercise.

2. Choose an activity (sitting on the couch works too) and have your friend poke you with those messages along the way.

3. Notice what you feel—are you feeling discouraged? Tired? Angry? Hurt? Are you laughing? What do you learn about your critic?

Tip: this sort of experiment can bring about all sorts of reactions—the point is to notice what happens to you and see if/where the self-compassion and protection kicks in. If you feel too overwhelmed hearing these messages from your friend, cut the experiment (safe word?) and ask for some support.

I’d love to hear about what works for you when your critic threatens your exercise or how the experiment goes. The more we call the critic out, the less power it has over our lives and our sense of self.

Posted in THE REAL YOU and tagged Embodiment, Emotional Health, Presence, Radical Acceptance, The Inner Critic, Well-Being
← Self-compassion in five wordsOwning your part in relationship: a story about how I woke up →