I fell asleep last week to the drone of a man who calls himself Scooter telling me about a new recipe he was trying out, cheddar bacon soup. It took him thirty-five minutes just to finish narrating his trip to Trader Joe’s. I zonked out as he recounted going through the checkout line of a woman he’s had a crush on for months. He was self-effacing, funny but not too funny, and very human. The story went on forever; If he was a dinner guest, people would have stopped making eye contact with him. But it was a perfect bedtime story.

Scooter’s lulling voice reaches thousands across the country through the Sleep With Me podcast. Alameda resident Drew Ackerman (“Scooter” on the show) has been soothing people to sleep for two years running, and his podcast is beginning to pick up steam, currently the 39th most popular podcast on iTunes. But it’s not the steam of boiling water or a barreling train. More the steam of a hot, relaxing bath. Nothing in Sleep With Me happens too fast. 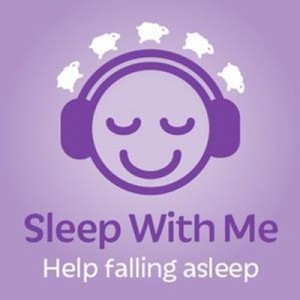 Drew’s podcast is the bedtime listening I’ve been searching for my whole life: something long, uninterrupted by musical interludes, more engaging than a guided meditation but still, well, boring. Although that’s not quite the right word. “Lulling,” a word Drew uses often, is more accurate.

I wanted to interview Drew in part because I suspect a lot of people, like me, are curious about this person who is doing something so innovative and yet, so ancient. How deeply human is it, after all, to want to someone there at night, someone who will stay awake for you as you drift off? I sensed something deeply… well, therapeutic, about Sleep With Me. Not the kind of therapeutic that fixes your problems, but the kind that makes you feel more whole and less alone in the world.

Drew wrote back to my email, saying he’d be happy to interview for this local Bay Area psychology magazine. “If you need a therapy angle, we could talk about, what if my therapist reads the interview?”

We met in a setting that is the opposite of sleep— a bustling coffee shop with loud rock music. Drew, contrary to what I expected, quivered with nervous energy for the 90 minutes we talked. He spoke in halting sentences, as if the smooth nighttime meandering suddenly hit rush hour traffic. This would not be a person I would pick off the street to lull anyone to sleep.

“I record in what’s basically a closet,” he explained. “It’s not even a walk-in closet. I climb under my clothes to get to the back, where I sit and record. It’s a struggle every time to quiet my inner critic to do the show. But the only way the show works is if I quiet my critic first.”

And that is what compels me towards Scooter— not just the boring, lulling tone of his voice, but the feeling that we’re two humans in the “deep dark night” (a phrase Drew uses in almost every episode) together. It’s the idea that he’s calmed himself down just enough to help me calm down, but he still struggles like the rest of us. Drew doesn’t fix anyone’s sleep problems. He’s just there, being an uncertain human on the nights that my own human uncertainty keeps me up.

The podcast was, in fact, born out of Drew’s own sleepless childhood. In fourth grade, he had such anxiety about going to school that he sometimes wouldn’t sleep at all on Sundays. “I’m the oldest of six kids. My parents just didn’t have the capacity to deal with it. So in my kid mind I figured, this is my own problem, I have to figure it out on my own.”

Then, a friend told him about a radio show that was on for two hours on Sunday nights called Dr. Demento. He started listening.

“Maybe sometimes I’d fall asleep, but mostly it just felt like this safe place. For those two hours, my pain and anxiety would be at bay. When I think now about what I wanted an adult to do for me, it was just for them to come and say, ‘You can’t sleep? That sounds terrible. I don’t know what to do either, but I can hang out here and sit with you.’”

Drew’s podcasts are long. “That’s something I learned slowly doing the show,” he told me. “It’s comforting to people when they see it’s longer than an hour. They think, ‘I have all this time to fall asleep!’ That’s what Dr. Demento was for me. I didn’t have to worry about falling asleep for two whole hours.”

Safe Place. Comfort. Presence. These are the things Drew hopes to provide to his listeners. They, in turn, gift him with trusting his voice, night after night.

“It’s this shared vulnerability. Listeners are lying in bed. They don’t know who I am, they have no idea what I’m gonna say, and they’re gonna fall asleep while I’m still talking to them. It’s a huge trust, a risk they’re taking, often out of desperation.”

Drew himself started creating the podcast during a vulnerable time in his own life. “I got sober right after I started the podcast. I’m still re-learning how to live and how to engage the world, rather than running away or overthinking it. Everything about the podcast that’s worked has been counterintuitive. Honestly, I would prefer not to be vulnerable. Sometimes I think, I should just read boring stories. Or, I made a huge error revealing myself in that episode, and I’m gonna pay for it. It’s a huge intangible benefit for me to hear that no, that’s exactly the opposite of what’s true.”

It reminds me of the wounded healer archetype. Healers are people who have experienced their own pain. They’ve healed enough to help others, but they also have to stay in constant touch with their places of pain and wounding. If they move too far away from the pain, they are no longer helpful. Therapists are usually wounded healers. So, apparently, are podcasters.

“I’m not in a therapeutic relationship with the listeners,” Drew says. “I don’t have any expertise, I barely have any amateur knowledge about how to help people fall asleep. My old way of thinking was that that would be something to worry about or be ashamed of. But, it’s so freeing. There’s no pressure for me to fix anyone’s sleep. I’m just gonna be sitting here, next to your bed, like I needed someone to do for me when I was a kid. There’s also no expectation on the listener’s end that they have to go to sleep, or meet any of my expectations. We’re both free.”

I ask Drew what his hopes for the future of the podcast are.

“Where I am now is asking, can I even live a life that has hope? My outlook used to be that I’m a bad person and this is all going to go terribly bad. All this podcast stuff doesn’t fit that outlook. Right now I’m living with one foot in each world; A world of no hope, and a world of hope. The podcast can’t fit in the world of no hope, because you can’t help people fall asleep from a place of no hope. I like doing this. I have to take care of myself and not burn out, so I can keep doing it.”

After the interview, we walked together to our respective bus stops. Drew walks at a lightning pace, I could barely keep up. I marveled again that this man who moves so fast and erratically during the day is the same person who lulls me to sleep half of my nights.

When we got to my stop, Drew asked, “So, do you think you’ll still be able to listen to the podcast after this?”

I hadn’t thought of that. “I don’t know,” I said. “Your awake self seems different than the disembodied voice on the podcast. But now I’ll be picturing you in your closet.” I felt a little like I had just had dinner at my therapist’s house, realizing that, as excited as I was to meet the man behind the mask, I suddenly doubted whether I really wanted to know that my therapist is human.

One of my former professors used to say that a genuine therapeutic encounter was a reverberating “thank you” between therapist and client. Purportedly, therapy is a service provided by the therapist for the benefit of the client, but oh, it goes both ways. The healers are also healed by the wounded.

Or, as Drew put it, “Our vulnerability is inexorably tied together.”

Share the post "Sleepless in San Francisco: An Interview with Scooter (aka Drew Ackerman), Creator of the “Sleep With Me” Podcast"

Posted in CULTURE and tagged interview, podcast
← How to Make Friends as an AdultStop the Mindfulness! →