Three years ago my only sister, 28 years old at the time, killed herself. She didn’t leave a note and hadn’t done anything to make her loved ones suspicious beforehand. I remember the words my mother spoke to me over the phone with excruciating clarity. It must have been the hardest phone call she ever had to make. This is my side of the story, the story of my sister’s suicide.

That phone call changed my life and marked the beginning of an incredibly difficult time for my family. Being my family’s emotional caretaker, I was mostly focused on everybody elses’ feelings at first. But there was nothing I could do to take away the pain in my father’s wracked sobbing, no way to ease the lost look in my niece’s eyes. I could only offer the embrace of my arms, a betrayal in their warm aliveness. I can see now that the way we all showed up for one another was a gift in itself, and not necessarily what every bereft family experiences. We may not have known exactly what to say or do, but we were in it together, and perhaps by default our feelings were all out on the table.

There isn’t a manual for how to behave when your younger sibling, who you’ve felt responsible for all your life, decides to end her own. But I did look, reading pretty much every book Amazon had to offer on the subject. Much of what I read was helpful in some way. I felt relief to know that I wasn’t alone. I gained insight into how she must have been feeling, and was comforted by the idea that her brain probably wasn’t functioning in a normal way at the time. As a mental health practitioner I understand that depression affects the way the brain normally works. But the suicidal brain goes even further in its dysfunction. Though hard to articulate, others have described it as a darkness that takes over, shutting out rational thoughts. Often this darkness is completely internal and people on the outside have no clue of the torment raging within. Such was the case with my sister. I saw her just four days before her death and thought she seemed happier than I’d seen her in a long time. Whether or not she’d already planned her demise, I’ll never know. Either way, she kept her pain private and as a result her avenues for help were limited.

I’ve spent days trying to piece together the puzzle of her death, hours lost trying to unlock hidden messages in emails several years old. What did I miss? How I could have saved her? Guilt is a normal part of grief and even more potent following suicide. I still don’t have any true answers, only vague ideas, and must accept that I won’t ever know what was going through her mind on that fateful day. 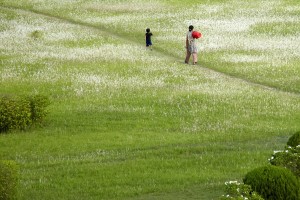 It’s been hard for me to separate who my sister was from the way she chose to die. Suicide becomes the defining mark of a person. I can’t just tell someone my sister has passed away. Being a relatively young person, they inevitably ask how she died and I’m left with one of two options; 1) lie, or 2) endure the awkwardness of my truthful answer. Thus far, I’ve always gone with option two, regardless of the awkward factor. Somehow for me it seems wrong to discredit my sister’s memory with a lie. And there is a part of me that wants to open up the conversation about suicide. Let’s not be so afraid to talk about it! In 2013 there were over 41,000 suicidal deaths in the US, and it is the second leading cause of death in 15-24 year olds. Worldwide, someone dies by suicide every 40 seconds (www.save.org). This is simply appalling. My hope is that by sharing my sister’s story I can help someone else.

My pain and quest for some sort of answer has led me to various spiritual teachers. I’ve been prodded to consider my beliefs about what it means to die and what might happen after death. I’ve learned to be grateful for the beauty of each day and to treat my loved ones as the precious, ephemeral beings they are. I’ve realized along the way that there is no answer, no end of the road to this particular pain. My grief, like most grief, does not happen in a linear fashion and does not ever reach a conclusion. No, grief comes in unexpected waves brought about by the most innocuous things. Her favorite type of cereal noticed as I stroll down the grocery store aisle. A song on the radio I made fun of her for liking. I will never be rid of the sting of losing my sister, and perhaps I wouldn’t actually want to be. Instead, every day I have the opportunity to weave what her life and death have taught me into the fabric of my own. I hope someday I’ll be able to remember her without being haunted by her final action in this life.

Jamie L. Katoff is a licensed Marriage & Family Therapist (MFC 48014) with a private practice in San Francisco. She specializes in working with individuals and couples dealing with relationship issues, life transitions, and loss.

Posted in THE REAL YOU and tagged grief, sibbling relationships, suicide
← #Teletherapy 101: I’m Tech Savvy But What is Teletherapy?!Un-standardizing Beauty →