I’ve watched The Muppet Christmas Carol every December with the same group of friends for seven years. This tradition started when we all lived in Seattle, and, after a few years of Skype-watching it together, we are all miraculously semi-settled in the Bay Area (at least for now). This year we got together with some added toddlers and babies that were not present in our first viewing. It was chaotic, but just as fun as ever. 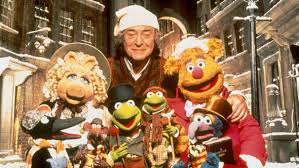 This year was the first time it occurred to me that A Christmas Carol (Muppet and non-Muppet versions) is a transformation tale, and it parallels the process of psychotherapy.

At the beginning of The Muppet Christmas Carol, a bunch of vegetables and ugly muppets sing about how cold and uncaring Ebenezer Scrooge is. The man has lived an unexamined life, until he is haunted by three spirits, which in turn bring him the gifts of grief, perspective, and existential meaning. These are the same gifts that psychotherapy ultimately gives.

When the first spirit, the Ghost of Christmas Past— a creepy child in this version— visits, she takes Scrooge first into a past Christmas at his old schoolhouse, where she lets him trip down memory lane for a minute. Then she takes him to the Christmas party at his first workplace, and Scrooge sees his younger self obsessing over the bookkeeping while everyone else is having fun. That is until he meets Clara, with whom he would later fall in love. After witnessing their first meeting, the child-ghost alludes to “another Christmas with this woman.”

“Oh Spirit, do not show me that Christmas,” Scrooge begs.

Often, the main work of therapy is grief. It’s going into the memories of dreaded losses, believing them too unbearable to revisit, but finding that having a witness (ghost or therapist) makes them bearable. The scene ends with Scrooge weeping and the ghost standing by looking on. 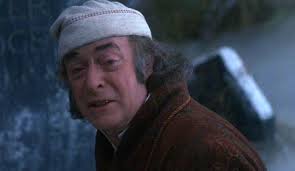 Back in his bed, Scrooge is visited by a jollier and more appropriately adult Spirit, the Ghost of Christmas Present. 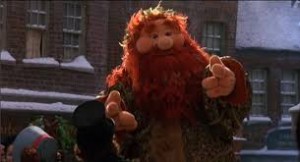 With this spirit’s help, Scrooge sees the present through eyes that are not his: those of his nephew and his employee Bob Cratchit. He sees the ways these men both love him and are disappointed and hurt by him.

In psychotherapy, we often can begin to see the world and ourselves through others’ eyes—- not superficially, giving lip service then leaping away, but in a sustained and thoughtful way. We can sit with the question, “How do others really feel about me?” without drowning in shame or anxiety.

Often the “Ghost of Christmas Present” shows up in therapy first when we see ourselves through our therapist’s eyes. I remember a former therapist of mine saying, “I don’t feel like I’m helping you.” I was surprised. She had helped me tremendously, but I realized that I was scared to tell her that because she might think I needed her less. So I had to stay “stuck” to keep her interested, or so I believed. After seeing myself through her eyes, I realized that I often withheld my competence and intelligence in my relationships for fear that the others would leave, or assume I didn’t need them. It was a painful realization at first— that I downgraded myself and frustrated others— but seeing myself from outside eyes allowed me to make empowering changes.

The ghost of Christmas future is a terrifying creature. I’m solidly in adulthood, and I still always take my restroom break during this scene. With the ghost of Christmas Future, Scrooge is forced to contend with his own death, and the impact he has on the world during his life. 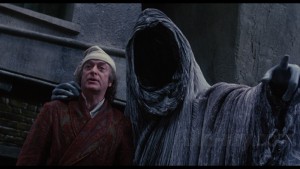 I believe that all therapy has these existential underpinnings. We might be working on a thought log or examining feelings about a second date, but in the background of all therapy is the awareness that life is finite, and we have one shot at it. Sometimes this becomes explicit in the therapy room, a part of the conversation. It’s always at least lurking in the corner.

Through the gifts of grief, perspective, and questions of existential meaning, Scrooge awakens on Christmas morning and makes a 180-degree turn. He vows to live outwardly, generously, and lovingly.

This is where reality is not like the movies. Not just because we don’t have Gonzo narrating as we go (dang it), but because, in the words of my old professor, “Good growth is slow growth.” Life does not change overnight, even if that night is the one between December 24th and December 25th.

I hope you are not visited by any Spirits tomorrow night. And yet, I do wish upon you grief, because it is a good gift, perspective, even when it’s painful, and courage to consider what your eventual death may mean for your present life. But, maybe all that can wait until the New Year. For this week, I hope you take pleasure in time off work (if you have it), and in the knowledge that the darkest days of the year are behind you.

Posted in CULTURE
← Why Silence in Therapy is GoodWhite Fragility, Guilt, and Unvirtuous Virtue: The Damaging Effects of Power and Privilege, Part III →