When I was a younger adult, I had a scathing inner critic.

It caused me all kinds of problems, which I handled in various maladaptive (read self-destructive) ways. That harsh internal voice mostly riddled me with anxiety which was so uncomfortable I looked for different ways to avoid feeling it–like partying, often with people I didn’t like very much. 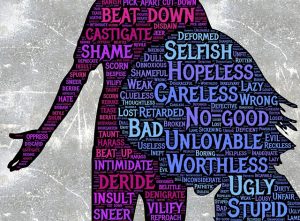 It caused self loathing, a sense that I was so unlovable that I stayed in negative relationships for fear of being alone with my detestable self or never being able to find a healthier one.

I rejected people before I could get close to them because my inner critic constantly reminded me that I was so flawed that no one worthwhile would want a deep connection with me once she really got to know me.

As I grew older I allowed myself to become more vulnerable, and let go of some of the harshness I expressed to the world as a result of my inner critic. But the voice still ground away at me, and I began to worry constantly. If you’d like to know what it was like, The Mighty has some amazingly accurate videos that sum up the high functioning anxiety I lived with.

I didn’t know a different way was possible.

On the outside I was cool, reserved and snarky. On the inside I was a chaotic mess. My sad, damaged, nervous system was hyper-aroused. Everyday social interactions riddling me with emptiness, dread and doubt.

When my daughter was born the anxiety ramped up. I obsessed over how I was screwing her up with all my not-good-enoughs. That’s when I entered therapy and heard the term “inner critic” for the very first time.

My therapist made a simple reflection in response to some harsh thing I said about myself.

I was so identified with my inner critic, I believed all the crappy things it told me about myself and never questioned its veracity. In one short sentence my therapist gave me an incredible gift. She gave me the space between the thought and the feeling.

From within that space I became able to observe my self-criticisms, and the moods and behaviors that came with them. While this was progress, it wasn’t enough. It was a bit of a bind because I was now able to observe me berating myself, but the observation itself became fodder for the critic. I had a new way to beat myself up; I couldn’t make my inner critic go away!

Despite the bind, therapy did help. I began to grow some self-compassion within the safe holding my therapist provided, because she was compassionate with me I learned to be so to myself. Self-compassion allowed me to be kinder to myself about my inner critic. I stopped hating myself so much for having one, and began to feel more settled around its existence.

But it was still there.

As a grad student in a psychology program, I learned more. Here’s the takeaway:  A critical inner voice is extremely common among people raised in the US. Most schools of psychology agree that a critical inner voice is basically an internalization of the shaming and criticizing we received from important attachment figures growing up–whether that was audible or silent judgement. As it was coming from our attachment figures, an inner critic is a protective voice, even though its communication style is painful. An inner critic is a defense mechanism against feeling existential anxiety like, “I just might be flawed.” It’s actually easier to allow the mind to berate itself (“I’m such a bad friend, I’m such a bad mother, I can’t speak up when I should, I’m not confident enough,” etc.) than to simply accept our human imperfections non-judgmentally.

As one beloved supervisor of mine says, “If a punch was flying at your face, reasoning with it wouldn’t stop it. If a punch is flying at you, or if the inner critic is, you have to knock that shit out.”

In other words, a good way to deal with an inner critic is to silence it the second you notice it. Easier said than done, but with practice it is doable.

I am fortunate to have gone to graduate school, and done my traineeship at a counseling center where the staff considered the emotional well-being of all the trainees a vital part of the program. What these places taught me is that surrounding yourself with people who are kind and flexible is of the utmost importance. That can be a real challenge. But like my colleagues say, “if it happens in relationship, it heals in relationship.”

If your inner critic is the manifested internalization of the criticisms made by someone you love, then it can be soothed by a caring relationship that is welcoming of your imperfections. And to be clear, we all have them. Without them we wouldn’t learn or grow. The more you can fill and surround yourself with compassion, the more likely you will be to squash your critic.

The first step is to notice when your inner critic is at play. Be compassionate towards yourself: you are only human after all. If this seems impossible, try Dharma Seed podcasts, Mindfulness Based Stress Reduction, yoga, or pick up your mindfulness practice again. All of these practices teach compassion for the self. Take up the challenge and find at least one or two friends who is welcoming of all the different parts of you, flexible when you need it, and loves you no matter what. Better yet, find a community like that.

And don’t forget the knockout. The real you is stronger than your inner critic could ever dream.