We bisexuals are used to receiving messages—explicit and implicit—from the world surrounding us. Some classics? 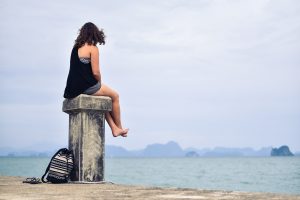 There’s no such thing as bisexuality.

You’re just confused and trying to sort things out.

You’ll have sex with anyone to get what you want.

You have the privilege of getting to “pass.”

All of these messages can install damaging and wounding core beliefs. And a trauma can be described as any unhealed wound.

According to Dr. Francine Shapiro, the creator of eye movement desensitization and reprocessing (EMDR) therapy, we learn things about ourselves and the world around us as a result of adverse life experiences. We internalize the messages that come with these learnings.

These messages can serve us or help us adapt, such as, “I’m a survivor.”

Or, these messages can create a belief structure that paralyzes us. Messages like “I am defective,” “I am weak,” or “I am permanently damaged,” are examples of such culprits. For many bisexuals, the messages themselves may cause the wounding, further crystallizing those negative core beliefs in the brain. Let’s explore the messages introduced in the beginning to discover how this plays out for bisexuals:

“There’s no such thing as bisexuality.”

Many bisexual individuals hear this message from family, friends, and society at large. Sadly, even clinicians may declare this untruth as medical fact. Perhaps even more devastating is when bisexuals hear this message from other queer-identified people. This general message usually follows up with the opinion that coming out as bisexual is merely the first step in coming out as homosexual.

The deeper message in all of this nonsense is that you don’t exist. Who you are, how you identify, everything that feels natural about your sexuality and/or sexual expression is invalid. I can think of few other messages that ring more oppressive.

Many bisexuals, myself included, are proud of our identities. We delight in being able to form attractions to all genders, even if it’s in various degrees and at different times in our lives. To further educate yourself on this more accurate definition of bisexuality, consider checking out the work of Dr. Fritz Klein, the first psychiatrist to fully validate our existence in his 1978 book The Bisexual Option.

“You’re just confused and trying to sort things out.”

Our American society and many other global cultures tend to freak out over anything that isn’t binary. Black or white, good or bad, fat or skinny, Coke or Pepsi, Democrat or Republican, gay or straight. If you can’t neatly check one box then there is something inherently wrong with you.

Bisexuals are especially vulnerable to being attacked for not fitting the binary because our sexual identity, by its nature, shatters the very idea of the binary. For people who can’t conceptualize the notion of continuum, or variations in sexual attraction/expression, it’s easy to slap the label of “confused” or even “attention seeking” on bisexuals.

“I am defective,” “There is something wrong with me,” or any variation on those statements are the oppressive thoughts at play here. These messages hit hard because, for many of us, claiming our bisexuality is the most natural thing we could ever do. That natural connection, met with responses like  “You’re confused,” can set off tremendous dissonance, distortion, and pain. Imagine if people explained the most vital aspect of your identity as just a confusion; that is what bisexuals experience on a near daily basis.

“You’ll have sex with anyone.”

Bisexuals are also used to hearing jabs that directly or indirectly imply that we’re easy, naturally more promiscuous, or more willing to use our sexuality to get ahead. Most of us have had the old Woody Allen adage thrown in our direction: “Bisexuality immediately doubles your chances of a date on Saturday night.”

Consider how mainstream movies and TV usually portray bisexual characters or storylines. Think Frank Underwood from House of Cards or Analise Keating from How To Get Away with Murder. Typically the bisexuality is featured as a component of their deceitfulness or as evidence of how broken they really are. You rarely see a healthy, whole, good-natured bisexual in mainstream entertainment.

The traumatic messages at play here are obvious: “I am devious or deceitful,” and “I am broken because of who I am.” Even the darkness of “Who I am will hurt another or put others in harm’s way,” can pop up when confronted with these stereotypes.

“You have the privilege of getting to pass.”

Within the LGBT community at large, bisexuals are often accused of having a level of privilege that insulates us from the rigors of living as an out person in a largely intolerant society. The fact that it may be easier for us to pass as straight or hide out in straight marriages is often cited to support this privilege. In my own experience,  I am vulnerable to hearing messages like this  from people who do not realize that I identify as bisexual, particularly because I am married to a cisgender man.

In comparison to other traumas I’ve experienced, healing around the trauma of the bisexual experience has proven some of the most difficult work I’ve had to do.

In my own recovery, I’ve drawn tremendous strength from the wisdom of Anaïs Nin. One of her most famous quotes proclaims: “Shame is the lie someone told you about yourself.”

When I consider the messages hurled at us bisexuals  from all directions, I can now see them as lies. It’s taken  a great deal of support, validation, and my own psychotherapy to arrive at this place.

If you are an ally to bisexual people,, consider the role that you can play in helping them realize a new truth about themselves. If you are bisexual, sexually fluid, or questioning, my hope for you is that you find the support and help you need to give these lies that have wounded you the big middle finger. May you find your new truth.

Posted in THE REAL YOU and tagged Authenticity, bisexual, cisgender, coming out, gay, LGBT, queer, sex, Sexuality, Trauma, Well-Being
← An Open Letter to Donald Trump from a Trauma Survivor and Trauma TherapistThe Dark Side of Motherhood: It Does Get Better →