Your comments on Monday morning in response to a veteran’s question about mental health treatment at a Retired American Warriors PAC implied that only veterans who are not “strong” and “can’t handle it” develop post-traumatic stress disorder. 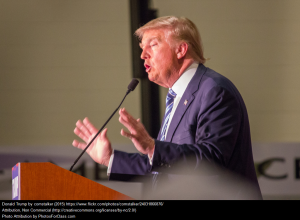 Yes, I read the transcript of your entire answer and saw the clip; yes, I read your representative’s comments accusing the mainstream media of politicizing the issue, and yes, I’ve even read the veteran’s  response, claiming he was not insulted by your answer.

I’m not shocked that you would frame PTSD as a “strong” vs. “weak” issue,  but I am incensed that your ignorance fuels your disciples with permission to act like bullies.

When it comes to healing trauma, imparting such permission, implicitly or explicitly, will continue the cultural cycle of demonizing people who ask for help or otherwise admit their woundedness.

I’ve come face-to-face with these issues of bullying and belittling in the past several weeks on my own social media pages. Being raised in a Conservative Christian family, for years I’ve maintained civil relationships with Republican family and friends. I voted Republican myself in my first two presidential elections.

Yet for the first time ever, I’ve had to remove friends from my Facebook page because the comments made by your supporters meet every definition of bullying.

I had the chance to meet Bernie Sanders a few weeks ago at a restaurant, and the Senator was gracious enough to take a picture with me.

I posted the picture on my wall with the simple intent of sharing that moment of special kindness and your supporters started to attack my friends who shared their joy at seeing the photograph. The individuals used nasty words to go after people they had never met.

Despite what you and your followers may believe, words carry a tremendous amount of power. The body can tense up into a fight, flight, or freeze response when we are attacked verbally or emotionally just as potently as when we experience physical traumas, like accidents…and wars..

When it comes to really understanding trauma, the often-intoned cliché that sticks and stones may break my bones but names may never hurt me is truly a bunch of bullshit.

I wonder what Alicia Machado knows about words hurting? Last week someone I know said that your comments to her were an act of kindness.

Without political intent, I shared that many of the body bullies I’ve dealt with in my own life made comments about my weight prefaced with “this is for your own good.” In 1996, the year that Alicia Machado won Miss Universe, my parents did an intervention on me sharing their concerns that “no one likes a fat woman.” Their words undermined everything else I had accomplished in my life at that point.

Did they do this from a place of concern, seeing how badly I’d been bullied over the years for being different? Or were they influenced by the larger message of tastemakers like you that fat women do not have the same value?

Several months later, as I walked across the stage as valedictorian of my high school class, all I could think about was how awful I looked. That was 1997, the year that my problems with addiction began.

As I shared a piece of my heart with this individual defending you on social media, they responded that Miss Machado wasn’t a victim and neither was I; we were both just damaged women processing things that were said to us through the filter of this damage.

Your supporter was right about one thing—I am not a victim anymore, I am a survivor and a thriver despite decades-long struggles with depression, addiction, and trauma-fueled suicidal ideation.

The problem is that your comments and your supporter’s comments to me keep people from seeking the help they need, every single day, in this country.

As a mental health professional, I witness this struggle in trauma survivors every day.

We all get wounded, Mr. Trump, and it’s never about being weak or strong.

The real issue is whether or not, when we are wounded, are we given permission to heal from our experience. Those of us who’ve been given the resources that we need to heal can transform into incredibly resilient individuals who can change this broken world.

I get that the pull yourself up by the bootstraps mentality is a big part of what defines your party’s plank of individual responsibility. I would ask you to consider that such an attitude goes against the science of what we’ve learned in the last thirty years about how trauma impacts the human brain.

There are resources on the science of how trauma and human beings heal from it that I would advise you to seek out before you speak further on mental health.

On the record, I recognize (even as a survivor of sexual trauma as well) that Hillary Clinton and her husband are full of faults and are far from perfect when it comes to scandal. Yet even for all of their faults, I’ve never harbored the concern that I’ve had for this country and it’s ability to handle trauma and mental health issues as fervently as I have since you’ve been a candidate.

Kindness and compassion are imperative in the treatment of PTSD.If you continue in the same manner with belittling, berating, and speaking from an utter lack of education,  I fear for the emotional health of people who will come of age in your America.

Even if you lose the election, I dread that what you’ve inspired in people has already wounded too many and the aftermath of these unhealed wounds will continue to bleed all over our nation unless we recognize the values of kindness and compassion once more.