Couples often come into therapy with quite different views of what the problems are.

And this is part of the problem.

Maybe even the whole problem.

At the simplest level this can be a function of each person seeing the other as the cause of their relationship distress. “She has no empathy for me.” “He’s a jerk.” “We never have sex anymore” (meaning, my partner is the obstacle!). 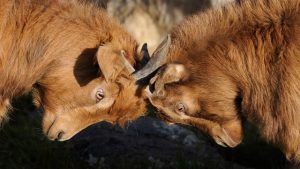 Blame is a natural response to stress and helplessness in our culture — perhaps now more than ever. But it prioritizes division over healing.

However, people don’t usually start out in relationships blaming each other. How does this develop?

Each one of us has a different set of values, which I define as emotionally loaded beliefs. With any partner there will be some values that overlap and some that don’t. These range from the classic big ticket categories like money, parenting and sex, down to seemingly little things like how clean the kitchen counter is or what kind of music is played in the car.

Our values shape our perceptions. For example, if I’m more picky about the counter being clean, I’ll tend to be more sensitive to it being cluttered or dirty. If my partner is more tolerant and tends to leave it dirty more of the time, I’ll tend to overestimate how often it’s dirty while my partner will tend to underestimate. If this becomes an area of conflict between us, then our estimates may diverge even further as we try to make a case for our positions.

This is a simple example, but I see lots of couples who have such big differences in perception that almost any event they try to describe becomes a battle of who’s version is correct. Each version is filtered, of course, through that partner’s lens, and usually represents some deeper emotional need. For instance, a partner who values autonomy sees  permissiveness with the kids as “giving them space,” while her partner who prioritizes security sees too much freedom as endangering the kids’ safety. In this case, the value of autonomy is underscored by the fear of being constrained, while the value of security is underscored by the fear of lack of safety.  These values and emotions almost always go back to formative early childhood experiences.

Typically, relationships start out with an idealizing honeymoon period, where differences are overlooked in the glow of a romantic fantasy. Gradually (or sometimes dramatically!) these value differences start to emerge. Often this happens around the six month period when the hormonally driven glow starts to fade. If things go well, partners are able to establish a dialog and acceptance around their differences, even though those differences will never actually go away. These differences are the 2/3 of couple’s problems that John Gottman’s research shows never go away. Gottman calls them “perpetual problems.”

If the differences become more contentious — with each partner defining the other as “wrong” in their beliefs or behavior — then those beliefs and behaviors harden into stories of fixed ideas and intolerance. Each partner is convinced of their position, interprets the other negatively, and a cycle gets created that amplifies and sustains the negativity.

Let’s take Jordan and Sarah. Jordan’s story about Sarah is that she’s selfish like her mother. Sarah’s story about Jordan is that he’s always criticizing her, the way his father criticizes him. The more he criticizes her, the more she pulls back to protect herself, which looks to him like she’s being selfish, which elicits more of his criticism, and so on.

When they come in to a session each will argue for their side of the story in the particular fight of the week, not seeing the other’s side. Sarah will tell me about how Jordan criticized her relentlessly for getting a massage, and Jordan will tell me how selfish it was of her to do that when she should have known it was the only time they could have spent together during the week. Two very different views of the same event.

This kind of cycle reifies their negative stories about each other, and as you can imagine, it can get much more complicated and fraught than this example.

How to do it better?