As fall approaches in the Bay Area, we never know what weather will come. Which is why, on a day as hot as this one was recently, a poor Gelato Scooper was scooping alone when there should have been two of him; and the line was stretched out the door. I’m sure his arm was aching, and then there I was, in a hurry. And there was the woman behind me with two little, and very hot kids. She and I waited as he scooped for the family ahead of me, it seemed in slow motion. And all the while, this poor mom behind me was telling her wilting kids how they weren’t going to have enough time to wait in line as long as it would take. They whined. She kept explaining how there wasn’t going to be time for gelato, as they pleaded with her. But she just kept standing there, explaining. Not leaving. 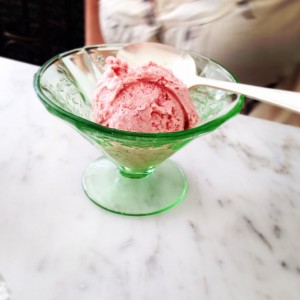 We all felt pulled. Those poor kids really needed that ice cream!  And that poor mama really wanted to give it to them, but she obviously had to be somewhere else too. And I really wanted to let her go ahead of me, but I had my own hurry and my own wilting child with me. The thing is, we are always pulled as parents. There are always competing needs. And when we experience competing needs it creates anxiety, which is something most parents live with as a constant. However, the less conscious we are of this pull and the ensuing anxiety, the worse the anxiety becomes and the more disharmony we actually turn around and create in our families.

It is important to be clear, not wishy-washy, when we communicate with kids, for several reasons. One very important reason is that young kids are still developing the cognitive ability necessary to handle ambiguity without falling apart. Those kids were so, so hot and desperately wanted the ice cream their mom had offered. But their still-developing cognition left them unable to navigate the complexity of a statement like “we might not have enough time,” because at the tender age of 3 and 5 years old, they still think in absolutes. This is why they were crying, instead of smiling, as they stood waiting in front of the ice cream. Saying “we might not be able to” is akin to telling a 5-year-old “we CAN’T.”  For kids this young, the actual hopefulness inherent in the word “might” doesn’t really register – most kids will go right for the potential catastrophe in whatever ambiguous statement we tell them.

Simultaneously empathizing with her kids’ desperation for a cool treat, and feeling the pressure to arrive on time to whatever the next thing was, this mom was really pulled in competing directions in that moment. If she’s like a lot of parents I know, she was probably worried about being late to another kid-centered activity – actually trying to give even more to these lucky gelatotarians. But she unconsciously attempted to alleviate her anxiety by talking to her kids about it. In doing so she inadvertently turned a sweet trip to the gelateria into a pretty stressful one. I don’t believe she was ever really going to skip the gelato, she was just pulled to the point of anxiety and ruminating out loud. Which is why, unless you truly don’t have the time, and you are prepared to haul your munchkins out of the ice cream store kicking and screaming when it’s 81 degrees and they have already picked out their flavors, you just have to hold onto that anxiety all by yourself.

I had a lot of empathy for this mama, as I have definitely been there myself many, many times. But I have been learning, as I watch so many of the families I work with struggle with this same issue, that some things are better left unsaid. This is really hard, because as thinking adults we are used to thinking through choices out loud with other adults.

It can be even more tricky when you have a really verbal child, because one major way they connect with us is through talking. But though they may have the conversational skills, they still lack the cognitive and emotional development to handle the pull. Don’t let them fool you! Some may appear flexible about mixed messages, while inside they may be stressed. In aiming to meet a child’s need for connection, we may inadvertently be creating inner conflict: “If I get my ice cream, Mommy will be in trouble for being late.” (ie, “Mommy will suffer if I get my needs met,” which is much more responsibility than a little one should have to handle). In this situation, probably everyone would have been better served if this mom had done some compassionate self-talk instead, like “We may be a few minutes late, but what parent of two young kids is always on time?” Or reminded herself that whatever it was, “it can wait a few extra minutes” and kept the kids out of the loop.

What’s the harm in sharing “the Pull” with your young kids? While it is helpful for children to learn the thought processes involved in decision-making, letting them in on it too early is stressful. Not only do high levels of the stress hormone cortisol correspond with health risks later in life; but frequent activation of the hormonal systems that respond to stress in children can have serious developmental consequences, rendering some children less capable of coping with stress in the long run. To be clear, a little stress in the gelateria is not an extreme amount, but regular exposure to this kind of anxious thinking does build up and contributes to a general pattern of family-wide stress and elevated cortisol levels. There is hard scientific evidence in support of the importance of stress reduction.  But sparing kids from the details of our anxious ruminations also spares parents unnecessary meltdowns. It’s also just more fun when we don’t sweat the small stuff! And experiences of calm, joy and laughter are actually beneficial to well-being.

When you’re faced with your family’s competing needs and you feel “the Pull,” here are a few helpful ways I have observed other families coping with a tough situation

Posted in THE REAL YOU and tagged Anxiety, children and feelings, Co-Parenting, mothering, Parenting
← Laws for in-laws: why trouble in these relationships hurts, and what to do about itStepping Into My Shadow: Halloween as Therapy →