Gangsters, single moms, single dads, actors, recent immigrants, college students, high school dropouts, elementary school kids, families. For me, the best part of working at a sliding scale community agency was the diversity of the clientele. Each hour was different than the one before it, and I reveled in getting to know my clients, establishing trust, and hearing the details of their personal stories. My clients shared their struggles as well as their successes, and I learned how to receive a stranger’s innermost thoughts, memories, and experiences. Over time, themes emerged: love, respect, and the desire to be acknowledged were all there, but so too were guilt, embarrassment, and shame. For every client these were mixed and layered and baked together like a kind of cake. But why, if so many of my clients were struggling with universal feelings, was there such a need for confidentiality and closed doors?

Shame typically arises when we feel we’ve violated a societal norm. It involves an internal experience of what we imagine will be an external reaction. Translation: we have done something so bad that if the rest of the world knew about it we could be expelled from our society or family. But where does this experience of shame actually come from?

Ask a question like that to a group, grab some popcorn, sit back and watch the proverbial football game ensue as finger pointing and blame take over. Team Family vs. Team Culture – it’s on! “The mom!”  “The media!”  “Religion!”  “Video Games!”  “Facebook!”  “Kim Kardashian!”  “No, no, it’s family history!”

All right, game over and now I have a headache. Instead of investing time and energy in this circular argument, let’s head over to a place where arguing and headaches don’t exist: the Garden of Eden. A magical land where all living beings frolicked in innocent nudity until the fateful moment when that lustful, gluttonous wench, Eve, broke the rules, brought about the fall of humanity and, subsequently, the den of sin we’ve been living in since.  I offer you this visual representation of God kicking Adam and Eve out of Paradise. 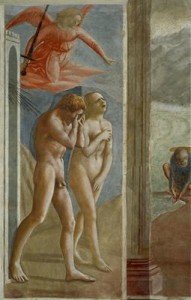 Exiting Paradise post-sin, Adam and Eve experience and express their shame differently.  Adam hides his face in despair while Eve covers her body from the evil world she is entering and desperately cries to the heavens. While Adam and Eve act as one of our earliest parables on the genesis of sin, shame, and the link between them, there are countless others. In order to get a deeper feel for what shame really is, let’s head from one land of paradise to another.

Nowadays, even with all the economic troubles they are facing, Greece still conjures up images of pristine beaches, whitewashed walls, and delicious food. It’s easy to forget that Greece was also the birthplace of philosopher and Oedipus Rex playwright, Socrates. Few mythological characters have enjoyed a place in the contemporary lexicon more than Oedipus (thank you Dr. Freud). But, for the purpose of exploring shame, Oedipus, move over and make some room for Aidos.

According to Greek poet Hesiod, this lesser-known goddess of Shame was responsible for the feeling that kept man from committing wrongs. Without her there would be “no help against evil”. When the Romans later took over, they were so touched by this myth that they appropriated Aidos into their own culture and built altars in her honor.

Eventually the early Christians came to town. Unlike the Greeks, their focus on one God required them to develop a different teaching strategy for the morally-weak. After all, Eve had been unable to keep her hands off one lousy apple. Enter stage left, the Seven Deadly Sins: Lust, Gluttony, Greed, Sloth, Wrath, Envy, and Pride. Enter Stage Right:  humanity, or Everyman.  Action! Audiences eagerly gathered to watch the morality plays of that era, where personified sins and Everyman gave expression to daily struggles, dangers, and temptations that could lead to shame and despair. These morality plays served as cautionary messages. They were the hugely popular box office hits of their time.

So we see that our experiences and discussions of shame are not new or novel. We have all been suffering from the affliction of being human since the dawn of time. But our reactions to shame, our shame about shame, is a key piece of the puzzle. Shame about shame is what creates the toxicity and maladaptive behaviors that emerge from trying to defend against unbearable feelings. In therapy this comes up often; if we’re able to scratch past the surface of a client’s coping mechanisms, we reach a shadowy corner where a belief about one’s perceived bad, sinful, or inadequate nature breeds like black mold in a dank basement. Alcohol, drug abuse, disordered eating, depression, anxiety, obsessive compulsive disorders, and violence are just a few coping mechanisms which can, at least temporarily, silence the pain. But they create their own problems.

One day at thecounseling center I received a call from my client coordinator requesting that I see a court-mandated felon recently released on probation after committing a violent crime. A week later I was surprised to meet a small, heavily pierced and tattooed Latina woman who was so shy she could barely look me in the eye.

Over the next few years I had the great fortune of getting to know her and learning, as with most clients, many of the secrets she hid from the world. Embedded in these personal accounts was a shame about her intrinsic nature as a person. She eventually trusted the therapeutic process enough to speak with honesty about the choices she had made in her life. She began to express her fears aloud about just being “bad” at her core. Her circumstances made our sessions unique but her feelings of shame were not much different than those of my client who had recently come out of the closet. Or those of my client experiencing a severe eating disorder. Or my dissatisfied actress client with racing thoughts that kept her up at night. Or my upper middle- class comedian who self- medicated with prescription pills. Every one of my clients, at some point, expressed feeling shame, confided their troubled ways of coping with it, and stressed a desire to instead “feel good”  about themselves.

Our culture works really hard to combat these feelings. Self-help books abound, inspirational quotes are everywhere, and platitudes like “nobody’s perfect” or “everything happens for a reason” tritely address very real fears and feelings. The concept of Emotional Intelligence is just making its way into our collective consciousness. But despite the occasional reference EI garners, it will likely be a years before any kind of widespread emotional intelligence becomes truly evident in our society.

Our perceived sins and shame have the potential to create a toxic, frantic anxiety inside. But does a school of thought (or culture or philosophy or anything) exist where sins do not equal shame?  Well, thousands of years before inspiring our fortune cookies, ancient philosopher Confucius realized, like his Western counterparts, that shame was an integral human experience. His humanist philosophy reacted to it in an entirely different way.

Confucius taught his followers that deeply feeling a negative emotion should be a positive experience, because that emotional pain would lead to great levels of self-improvement and self-fulfillment. Shame was not a toxic experience to hide, or feel even greater shame over; it was to be embraced and welcomed in the self-actualization process. Collectivistic ideologies like Confucianism in ancient China placed great emphasis on relationships between family, community and country, and negative feelings were not to be hidden away in dark, musty corners of the mind, but to be shared. In modern-day Western culture, that’s often not the case.

History has taught us that sin is a universal part of the human condition. But would we be able to move more effectively through our lives if we accepted with more equanimity our sometimes sinful thoughts or moments? Confucius would say yes, Adam and Eve would say no. Clients seeking therapy are looking for help, some with a clear grasp on a specific struggle and others with a nebulous idea that something is not as they want it. Whatever theory you may subscribe to – Gestalt, CBT, Family Systems, Narrative or another – and whoever your client base is – a Latina ex-gangster, a Caucasian high school drop-out, an African American widow, a high-achieving businessman – a therapeutic project is the same: build trust, connect, understand, reflect, move forward. As therapists, our role is varied, but if often involves helping clients of all backgrounds and experiences understand shame—and come to terms with the imperfections of being human that we have been dealing with since the dawn of time.