This piece is an exploration of the psychological concept of “parts.” According to the Internal Family Systems model, the mind is made up of myriad subpersonalities. In addition, Carl Jung’s idea of the Collective Unconscious suggests that beyond our individual unconscious, we possess ancestral memory and experience including archetypes such as “mother,” “teacher,” “hero,” and “villain.” It is often helpful in psychotherapy to tease out these complex, often contradictory parts of the self and bring them into consciousness in order to find new ways of relating internally. 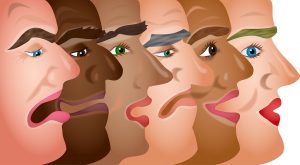 The Voices in my head are cold, sticky, sharp-edged, toothy monsters. The Voices are nurturers, warm and enveloping, as they rock us gently, “shh shh, it’s alright.” The Voices are juiced up children cartwheeling in the yard and hungry children hiding in closets. Some are calm and others scream out urgently. Some use threats and some beg for peace.

They say we’re weak, pathetic, lazy, stupid. They say we’re strong, brilliant, special, good enough just as we are. They say, “Go big or go home!” They say, “We should make ourselves as small as we can.” The Voices are contradicting one another. Paleolithic grunt, three-year-old squealing, artist fantasizing, believer praying, cynic eye-rolling, scientist demanding proof, nihilist shrugging, “Nothing matters anyway”.

The Voices are our childhood home(s), laughing, singing, creating. Our childhood home(s), crying, cursing, doors slamming, plates of food thrown across the dinner table. A child trying to disappear while the other one yells “Look at me! Look at me!” Dogpiled, tickle attacked, bee stung. Worried – do the grownups have all this under control? Are we safe?

The Voices are our adulthood home – this city, warm in parts and then suddenly very very cold even though it’s summertime. This city, playing, laughing, local organic produce shopping, luxuriating, coasting. This city, angry, evicting, hustling, rejecting, uphill both ways. Is it safe to call this place home?

The Voices are this country, narcissistic, imperialist, generous and welcoming, war monger, peace monger, teacher, gated community, ghost town, immigrant, conqueror, no justice, sidewalks paved in gold, sidewalks drenched in piss. Do the people with the power have all this under control? Are we safe? Some more than others.

The Voices are sometimes a tower of amplifiers, grunged out, muddy, tinnitus-inducing. More rare, they’re a gentle trickle in the creek bed while we sit quietly together, just breathing. Most of the time one or two Voices are louder than any other – these are The Voices reinforced year after year, upholding the hierarchy reflected outside, necessity being the mother of invention when we didn’t know any other way to survive. They’re so close, we think they’re telling the truth. They’re our masters, but so clever the rest of us think their ideas are our own.

Sometimes A New Voice comes in like interference on the radio, boldly revolting when before, at most, she’d quietly rebel in the shadows or only be found on vacation, especially near large bodies of water or good climbing trees. The powerful get frightened. They lash out, scrambling to maintain control. They’re afraid if this New Voice is heard, they’ll lose everything.

Speaking of large bodies of water, we dreamed our favorite mountain lake was drained and the machines were prepping the ground for luxury condos we’d never be able to afford. And all that nourishing, gentle, deep, cool water was just…gone. The powerful Voices who forged this deal were trying to punish us for feeling so free, so at peace in that lake. They’re afraid of rope swinging, all control lost the moment we let go and become a bird and then [splash] a fish.

“We know it’s cliche and not exactly true, but we can be anything we want,” some of The Voices say, “We can take up as much space as we need. And we can feel all the feelings – we have to.”

The Voices debate this for a while. And by “debate,” I mean bludgeon, imprison, form alliances, betray, collapse into despair, dress wounds, find hope and meaning in “The Universe,” cuddle, and start over again.

All of this as we sit across from you at dinner. You’re just a “you,” not a “they.” You’re a mountain we can’t see inside. We can’t imagine you also have Voices. We can’t imagine the complexity of your inner experience, you The Singular One. But if we’re wrong and you have Voices too, who’s doing the talking?